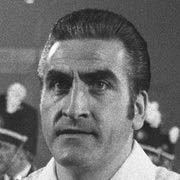 Biwersi was a referee for the German Football Association between 1965 and 1978. He refereed 121 games in the Fußball-Bundesliga, and 27 games in the 2. Fußball-Bundesliga within this time span. One of his last matches was the record Bundesliga victory (Borussia Mönchengladbach 12–0 Borussia Dortmund). Since there were no ball boys in the 1970s, Biwersi had to go and fetch the balls which were shot past Dortmund's goal.

From 1969 until 1978, Biwersi was also a FIFA referee. He was in charge of 16 international matches and 26 European Cup games.

Biwersi refereed the match between the Soviet Union and Sudan during the 1972 Summer Olympics. He was a linesman at the 1974 FIFA World Cup and took charge of one game at the World Cup four years later in Argentina.

The contents of this page are sourced from Wikipedia article on 09 Mar 2020. The contents are available under the CC BY-SA 4.0 license.
View Ferdinand Biwersi 's image gallery
Image Gallery