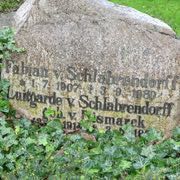 Schlabrendorff was the son of Carl Ludwig Ewald von Schlabrendorff (born Berlin, 1854, died Detmold, 1923) by his marriage to Ida von Stockmar (1874–1944), a great-great-granddaughter of William I, Elector of Hesse by his mistress Rosa Dorothea Ritter.

He was trained as a lawyer, later joining the German Army. As a lieutenant in the reserves, he was promoted to serve as adjutant to Colonel Henning von Tresckow, a major leader in the resistance against Adolf Hitler.

He joined the resistance and acted as a secret liaison between Tresckow in Russia and Ludwig Beck, Carl Goerdeler, Hans Oster, and Friedrich Olbricht in Berlin, taking part in various coup d'état plans and plots.

On 13 March 1943, during a visit by Adolf Hitler to Army Group Center Headquarters in Smolensk, Schlabrendorff smuggled a time bomb, disguised as bottles of cointreau, onto the aircraft which carried Hitler back to Germany. The bomb detonator failed to go off, however, most likely because of the cold in the aircraft luggage compartment. Schlabrendorff managed to retrieve the bomb the next day and elude detection.

He was brought before the Nazi People's Court (Volksgerichtshof) on February 3, 1945. However, while Schlabrendorff was awaiting trial, the courtroom took a direct hit from a bomb during an American air raid led by Lt. Col. Robert Rosenthal. The bomb killed Judge-President Roland Freisler, who was found crushed by a beam, still clutching Schlabrendorff's file.

Between February and May 1945, Schlabrendorff was moved from one concentration camp to another: Sachsenhausen, Flossenbürg, Dachau, Innsbruck. In late April 1945 he was transferred to Tyrol together with about 140 other prominent inmates of the Dachau concentration camp, where the SS-Guards fled after being confronted by a regular German Wehrmacht unit led by Wichard von Alvensleben. He was eventually liberated by the Fifth U.S. Army on 5 May 1945.

After the war, Schlabrendorff was admitted to the Protestant Order of Saint John (Bailiwick of Brandenburg), in which he served as Captain of the Order (legal counsellor to the Herrenmeister, head of the Order) from 1957 to 1964.

From 1967 to 1975, he was a judge of the Constitutional Court of West Germany, the country's highest tribunal. Schlabrendorff died in 1980.

He married Luitgarde von Bismarck, born at Frankenstein in Silesia (now Ząbkowice Śląskie, Poland) on 12 May 1914, and had the following children:

"To prevent this success of Hitler in all circumstances and by all means, even at the expense of a heavy defeat of the Third Reich, was our most urgent task. (Diesen Erfolg Hitlers unter allen Umständen und mit allen Mitteln zu verhindern, auch auf Kosten einer schweren Niederlage des Dritten Reiches, war unsere dringlichste Aufgabe.)" – from his book, Offiziere gegen Hitler (Officers Against Hitler), Zurich: Europa-Verlag, 1946, p. 38.