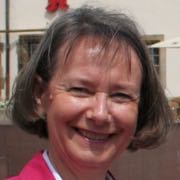 Evelyne Gebhardt (born 19 January 1954) is a German politician and Member of the European Parliament (MEP) from Germany. She is a member of the Social Democratic Party of Germany, part of the Party of European Socialists.

Her main interests are bio-ethics, consumer protection and citizens' rights.

Gebhardt was born in a suburb of Paris. Her father was an industrial chimney sweeper and her mother worked as a translator for Kodak.

After graduating from Lycée Lamartine in 1972, Gebhardt became the first in her family to go to university. She studied at the University Paris Diderot, the University of Tübingen and the University of Stuttgart, studying linguistics, political science and political economy. She subsequently worked as a freelance translator, and moved to Germany in 1975. Since 1992 she has been Chair of the Working Group of Social-Democratic Women. After working in local politics with the SPD, she took out German nationality in 1993, which allowed her to stand for elected office.

In 1999, Gebhardt was awarded the Federal Cross of Merit (with ribbon).

Member of the European Parliament, 1994–present

Gebhardt is best known for her role in shaping the controversial Services Directive in 2005 and 2006. The directive had aimed at opening up the European Single Market to competition amongst service providers but was, after much political pressure from mostly western and southern EU countries, subsequently watered down by the European Parliament. Gebhardt was parliamentary rapporteur for the directive and played an important role in facilitating an agreement with the European People's Party which allowed Parliament to pass the directive with a huge majority and thereby forcing EU governments to follow their line.

Along with Kaja Kallas, Gebhardt is rapporteur for the digital single market.

In January 2017, Gebhardt was elected as one of the fourteen vice-presidents of the European Parliament under the leadership of Antonio Tajani.

The contents of this page are sourced from Wikipedia article on 09 Mar 2020. The contents are available under the CC BY-SA 4.0 license.
View Evelyne Gebhardt 's image gallery
Image Gallery