Ethel Maude Warwick was the daughter of Frank and Maude, born in Hardingstone, Northampton on 13 October 1882. Her education began in Margate and Hampstead, but by the early 1890s she was studying to become an artist at the London Polytechnic. She became an artists model to help pay her tuition there, which led to her meeting Herbert Draper, who used her as a model for several of his paintings, including The Lament for Icarus. Through him she became a favoured model for several artists, including John William Godward, who painted several portraits of her, and Linley Sambourne, for whom she posed nude in a series of photographic studies. She was also sketched by James McNeill Whistler.

She began training as an actress at Henry Neville's acting school in the late 1890s, and first appeared on stage at the Grande Theatre in Fulham in July 1900 as Emilie de L'Esparre in The Corsican Brothers.

She died in a Bognor Regis nursing home on 12 September 1951.

The contents of this page are sourced from Wikipedia article on 09 Nov 2021. The contents are available under the CC BY-SA 4.0 license.
View Ethel Warwick 's image gallery
Image Gallery 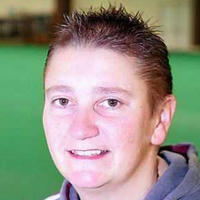