Esteban Gerard Contreras (born 28 February 1953, in Mexico City) is a sailor from Mexico. Gerard represented his country at the 1968 Summer Olympics in Acapulco. Gerard took 18th place in the Dragon with Javier Velázquez as helmsman and Roberto Sloane as fellow crew member. Gerard represented his country again at the 1972 Summer Olympics in Kiel, Germany. Gerard took then 23rd place in the Soling with Armando Bauche as helmsman and Daniel Escalante as fellow crew member.

The contents of this page are sourced from Wikipedia article on 29 Jul 2020. The contents are available under the CC BY-SA 4.0 license.
comments so far.
Comments
From our partners
Sponsored
Reference sources
References
https://web.archive.org/web/20200418070349/https://www.sports-reference.com/olympics/athletes/ge/esteban-gerard-1.html
https://www.sports-reference.com/olympics/athletes/ge/esteban-gerard-1.html
Trending today in 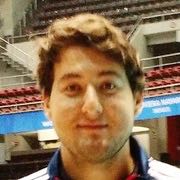