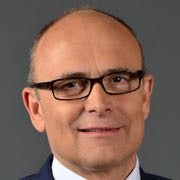 Erwin Sellering (born 18 October 1949 in Sprockhövel) is a German politician. From 2008 to 2017 he was the 4th Minister President of Mecklenburg-Vorpommern.

Sellering studied law and has lived in Mecklenburg-Vorpommern since 1994, where he worked at the courts of Schwerin and Greifswald.

In the 2016 state elections, Sellering and his SPD garnered a better-than-forecast 30.6 percent. He had campaigned on local issues, urging voters to focus on jobs creation in the wind turbine sector, decentralized integration of refugees and pension parity with Germany's western regions.

Between October 2016 and May 2017, Sellering chaired the Conference of Ministers-President. He was a SPD delegate to the Federal Convention for the purpose of electing the President of Germany in 2017.

On May 30, 2017, Sellering announced his resignation from all official political positions after he had been diagnosed with lymph cancer that needed immediate treatment. He proposed as his replacement Manuela Schwesig.

Sellering is known for taking a hard line against neo-Nazis and for supporting families.

Sellering is married, has two children and currently resides in Greifswald.