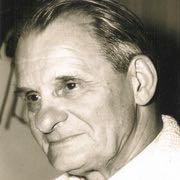 Erwin Faber (21 July 1891 – 4 May 1989) was a leading actor in Munich and later throughout Germany, beginning after World War I, and through the late-1970s, when he was still performing at the Residenz Theatre (The National Theatre of Bavaria). Born in Innsbruck, Austria, Faber remained in Germany during the Third Reich, emerging afterwards as a prominent actor in the Federal Republic of Germany (West Germany). He died in Munich in 1989, only two months after his last performance at the Residenztheater (the National Theatre of Bavaria), at age 97.

In addition to performing in dozens of dramas and films in Germany, working with the leading directors in post-World War I Germany, such as Max Reinhardt, Otto Falckenberg, and Erich Engel, Faber also was chosen by Bertolt Brecht to play the leads in the first three staged plays of Brecht in Munich, beginning with Drums in the Night (Trommeln in der Nacht) at the avant-garde theatre, the Munich Kammerspiele in September 1922, followed by In The Jungle of Cities (Im Dickicht der Städte) at Munich's Residenz Theater in May 1923, and The Life of Edward II of England (Leben Eduards des Zweiten von England) directed by Brecht himself in his directing debut and featuring Oskar Homolka, in March 1924.

Erwin Faber also played the lead in a film written by Brecht in 1923, Mysteries of a Barbershop (Mysterien eines Friseursalons), with leading comic and dramatic actors of Germany of that time: Karl Valentin, Liesl Karlstadt, Blandine Ebinger, Max Schreck, and Carola Neher. The 16-minute improvised film is now considered one of the hundred most important films in history of German film.

Erwin Faber also was cast by Ingmar Bergman for his film Life of the Marionettes in 1980.

The contents of this page are sourced from Wikipedia article on 10 Mar 2020. The contents are available under the CC BY-SA 4.0 license.
View Erwin Faber 's image gallery
Image Gallery