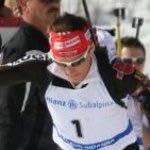 Erik Lesser (born 17 May 1988) is a German biathlete. In 2010, he ran his first single World Cup Race. At the 2014 Winter Olympics in Sochi he won a silver medal at Men's individual. At the Biathlon World Championships 2013 he won a bronze medal with the German team in Men's relay.

His grandfather Axel Lesser competed in cross-country skiing for East Germany at the 1976 Winter Olympics.

Erik Lesser, grandson of Axel Lesser, lives in Zella-Mehlis and trained mainly in Oberhof. His coach is Mark Kirchner, before Peter Sendel. Lesser began cross-country skiing at the age of six and took up biathlon in 1999 at the age of eleven. A graduate of the Sports Gymnasium Oberhof, he started his competitive career with the club SV Eintracht Frankenhain.

In 2008 he started in Ruhpolding at his first Junior World Championship, where he was seventh in the individual, 16th in the sprint and eighth in the pursuit. A year later he won in Canmore a bronze medal in the individual competition, finished eleventh in sprint and pursuit and took the first leg in the men's relay, where together with Simon Schempp, Benedikt Doll and Florian Graf he took a gold medal. In the summer he won at the Junior Summer World Championships in Oberhof, taking the sprint and pursuit titles on roller skis.

In his World Cup debut in Kontiolahti on 12 March 2010 Lesser finished second in the German mixed relay with Kati Wilhelm, Magdalena Neuner and Simon Schempp. In his debut in solo competition, he finished 44th in the sprint, qualifying him for the subsequent pursuit where he finished 51st. In 2011 he improved his performance and at Holmenkollen in Oslo he finished 24th in the pursuit and 40th in the sprint. At the first race of the 2013 in Östersund Lesser stood for the first time on the World Cup podium. He finished third in the individual, achieving a clear shoot.

In the 2014 Winter Olympics in Sochi Erik Lesser won silver medals in the individual competition and with the German men's relay squad. On the final day of the Games, he also took part in the 50km cross-country freestyle race and finished 42nd among 64 starters.

In the 2015 World Championships Erik Lesser finished fifth in the sprint race. In the ensuing pursuit, he won the gold medal and thus also celebrated his first World Cup victory ever. With the season victory in the World Cup Lesser was double world champion.

*During Olympic seasons competitions are only held for those events not included in the Olympic program.
**The single mixed relay was added as an event in 2019.

The contents of this page are sourced from Wikipedia article on 09 Mar 2020. The contents are available under the CC BY-SA 4.0 license.
comments so far.
Comments
Reference sources
References
http://www.sochi2014.com/en/athlete-erik-lesser
https://www.biathlonworld.com/athletes/id/btger11705198801/
https://biathlonresults.com/?IBUId=btger11705198801
https://www.sports-reference.com/olympics/athletes/le/erik-lesser-1.html
https://www.olympic.org/erik-lesser
https://www.teamdeutschland.de/de/athleten/detail/a_action/show/a_athletes/471.html
Trending today in