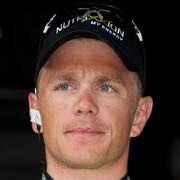 Eric Baumann (born 21 March 1980 in Rostock) is a German professional road bicycle racer for Team NetApp in 2010 and used to ride for the UCI Continental team Team Sparkasse. He secured a contract with T-Mobile Team in 2004, having turned professional with Team Wiesenhof in 2003 and before that riding as amateur for Team Köstritzer.

He lives in Leipzig.

The contents of this page are sourced from Wikipedia article on 08 Mar 2020. The contents are available under the CC BY-SA 4.0 license.
View Eric Baumann 's image gallery
Image Gallery
comments so far.
Comments
Reference sources
References
http://www.cyclingarchives.com/coureurfiche.php?coureurid=1279
Trending today in