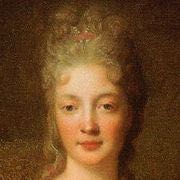 Elisabeth-Claude Jacquet de La Guerre (née Elisabeth Jacquet) was born into a family of musicians and master instrument-makers in the parish of Saint-Louis-en-l'Île, Paris. A child prodigy, she received her initial musical education from her father and performed on the harpsichord at a young age before King Louis XIV. As a teenager she was accepted into the French court where her education was supervised by the king’s mistress, Françoise-Athénaïs, marquise de Montespan. She stayed with the royal court until it moved to Versailles and in 1684 she married the organist Marin de La Guerre, son of the late organist at the Sainte-Chapelle, Michel de La Guerre. After her marriage she taught, composed, and gave concerts at home and throughout Paris, to great acclaim.

Jacquet de La Guerre was one of the few well-known female composers of her time, and unlike many of her contemporaries, she composed in a wide variety of forms. Her talent and achievements were acknowledged by Titon du Tillet, who accorded her a place on his Mount Parnassus when she was only 26 years old, next to Lalande and Marais and directly below Lully. A quote from Titon du Tillet describes her

"marvellous facility for playing preludes and fantasies off the cuff. Sometimes she improvises one or another for a whole half hour with tunes and harmonies of great variety and in quite the best possible taste, quite charming her listeners." (Le Parnasse Français, 1732)

Her first published work was her Premier livre de pièces de clavessin which includes unmeasured preludes and was printed in 1687. It was one of the few collections of harpsichord pieces printed in France in the 17th Century, along with those of Chambonnières, Lebègue and d'Anglebert. During the 1690s she composed a ballet, Les Jeux à l'honneur de la victoire (c. 1691), which has subsequently been lost. On 15 March 1694, the production of her opera Céphale et Procris at the Académie Royale de Musique was the first of an opera written by a woman in France. The five-act tragédie lyrique was set to a libretto by Duché de Vancy. Like her contemporaries, she also experimented with Italian genres: principally the sonata and the cantata. In 1695 she composed a set of trio sonatas which, with those of Marc-Antoine Charpentier, François Couperin, Jean-Féry Rebel and Sébastien de Brossard, are among the earliest French examples of the sonata.

During the next few years many of her near relations died, including her only son who was ten years old, her mother, father, husband, and brother Nicolas. She continued to perform, however, and in 1707 her collection Pièces de Clavecin qui peuvent se jouer sur le Violon, a new set of harpsichord pieces, was published, followed by six Sonates pour le violon et pour le clavecin. These works are an early example of the new genre of accompanied harpsichord works, where the instrument is used in an obbligato role with the violin; Rameau's Pieces de clavecin en concerts are somewhat of the same type. The dedication of the 1707 work speaks of the continuing admiration and patronage of Louis XIV:

"Such happiness for me, Sire, if my latest work may receive as glorious a reception from Your Majesty as I have enjoyed almost from the cradle, for, Sire, if I may remind you, you never spurned my youthful offerings. You took pleasure in seeing the birth of the talent that I have devoted to you; and you honoured me even then with your commendations, the value of which I had no understanding at the time. My slender talents have since grown. I have striven even harder, Sire, to deserve your approbation, which has always meant everything to me...."

She returned to vocal composition with the publication of two books of Cantates françoises sur des sujets tirez de l'Ecriture in 1708 and 1711. Her last published work was a collection of secular Cantates françoises (c. 1715). In the inventory of her possessions after her death, there were three harpsichords: a small instrument with white and black keys, one with black keys, and a large double manual Flemish harpsichord.

During the 1990s there was a renewed interest in her compositions and a number have been recorded.

Jacquet de la Guerre's early trio sonatas and violin/viola da gamba sonatas survive only in manuscript sources in Paris. The rest of her output is thought to have been published in her lifetime, although Titon du Tillet mentioned a lost Te Deum setting in his tribute to Jacquet de la Guerre.