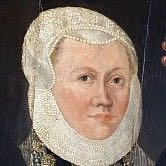 Countess Elisabeth of Regenstein-Blankenburg (1542 â€“ 20 July 1584) was Princess-Abbess of Quedlinburg. As such, she is numbered Elisabeth II.

Elisabeth was the daughter of Count Ulrich of Regenstein-Blankenburg, and his second wife, Magdalene of Stolberg.

Augustus, Elector of Saxony, was initially against her election. He eventually agreed to recognize her as abbess, on condition that he approves all the future candidates for the office of Abbess of Quedlinburg. Elisabeth II had to agree to impose taxes together with Augustus.

The contents of this page are sourced from Wikipedia article on 09 Mar 2020. The contents are available under the CC BY-SA 4.0 license.
View Elisabeth II, Abbess of Quedlinburg 's image gallery
Image Gallery