Edward Fella (born 1938) is an American graphic designer, artist and educator. He created the OutWest type in 1993. His work is held in the collection of the Cooper-Hewitt, National Design Museum, the Brauer Museum of Art, and the Museum of Modern Art. He is the recipient of the 2007 AIGA Medal. He is also the recipient of the Chrysler Award in 1997. Curt Cloninger called Fella as "the contemporary master of hand-drawn typography."

He created the OutWest typeface. He designed it by hand. It has a 15-degree ellipse. His hand design style has been described as "American folk art typography". His style and work has influenced designers like Lorraine Wild, P. Scott Makela, Jeffrey Keedy, Elliott Earls and Barry Deck.

Edward Fella was born in Detroit, MI in 1938 to a middle-class family and attended Cass Technical High School, a magnet school in Detroit where he studied lettering, illustration, paste-up and other commercial-art techniques. He graduated from Cass tech in 1957 and from then he went into the commercial graphic industry.

Edward Fella started out his career being a commercial artist for 30 years from 1957 to 1987. Most of the works he created during this time were automotive and health care posters. According to this article, his first job right after he finished high school was as an apprentice at Phoenix studio, it was his first job in the commercial space. His day to day work during his time as a commercial artist was drawing headlines and layouts which helped refine his style and skills. His illustrations were reflective of the trends of the time, while the typography he used was ironic to commercial art deco type. Fella explored many different types of techniques that helped him through his career in design such as found typography, scribbles, brush writing, typesetting, rubdown letters, public domain clip art, stencils and much more. Fella was given the name "the king of zing" because of his whimsical illustration style he had. During the 60's and 70's Fella felt that his commercial work was not enough for him and started to become very active in Detroit's culture scene. He offered his services to some alternative art institutions. He also became the designer for the Detroit Focus gallery. While there he created dozens of event posters and directed the Detroit Focus Quarterly. These types of assignments gave Fella the push to print the kind of experimental and crazy designs that he was doing in private. Fella used a positive photostat machine and made collages with images and type that had been readily available. One of Fella's main creative outlet was his after the fact posters. These posters were made to give to those attending events, he made a small number of posters to give to people that attended the event instead of having to make a bunch of posters for only a small number of people to see and come to the event. He made these posters for lectures and for appearances he made. Since he made the posters for people that came to the event he had more creative freedom because he did not have to make it appeal to a commercial audience. The posters also helped him to continue expanding his body of work. In 1985 Fella retired from the commercial industry and decided to go back to school and enrolled in Cranbrook Academy of Art.

After his time as a commercial artist he went to study at the Center for Creative Studies (now the College for Creative Studies) and graduated from there in 1985 and then after that Fella went to the Cranbrook Academy of Art and graduated from there in 1987. While in Cranbrook, Fella was able to pursue his exploration of design and helped him refine his craft and combined his new creative work with his 30 years of experience as a commercial artist. After graduating from Cranbrook, Fella was hired to teach at California institute of the Arts by Lorraine Wild in 1987. Fella gave his last lecture at CalArts on April 15, 2013.

While Studying at Cranbrook, Fella had the freedom to continue and concentrate on his artistic exploration and experimental designs. Fella's work developed into a very elaborate pseudo-anarchic designs. This was very different from any thing that was being made at the time. His designs impacted and influenced a new era of designers who wanted to make a claim in the design world because of this Fella gained a huge following by the time he was fifty and became a controversial new designer. Fella was given the title of "Graphic godfather" by Emigre magazine.

Edward Fella was known to break every rule in typography and design. He had a style that was unique to him at the time it was slightly based on the theory of deconstruction, but he took that and pushed it even further. He distorted a style of sanserif with his own hand writing with various thicknesses, curves, and tails to each character so that each one is different from the one before. Fella is one of the most extreme example of a typographer who is able to achieve the same creative freedom as the painters and sculptors he promoted in catalogs and posters. When Fella started making hand-hewn typography, he mirrored earlier "words in freedom" produced by Dadaist, Surrealist, and Futurist. Fella has created two typefaces Outwest and Fella parts these typefaces show his eccentric and creative style. These typefaces both had a huge impact for being quirky and different. Outwest type looks like cactus wearing cowboy hats and Fella parts looks like a mix of comic sans and dingbat fonts. He distributes these font through Emigre fonts and even thought these fonts are crazy and over the top they were still adapted to mainstream designs.

Throughout his career, Fella has helped and influenced designers with his designs. He started helping designers when he would visit Cranbrook as a guest critic before he became a student and continued even after he became a student. After graduating, he joined Cal Arts where he taught design and helped influence the new generation of designers. An example of someone he influenced is Jeffery Keedy, Keedy made a typeface called keedysans and has similarity's to Fella's style with inconsistent spacing and the characters were rounded and sometimes sliced. Also Barry Deck, a graduate from cal arts, creator of the iconic typeface template gothic, which was influenced by Fella ; Deck even says that he made it intentionally imperfect to show the imperfect language of an imperfect world. Decks typeface became one of the most important typefaces of the decade. Fella made many sketch books and collages that helped inspire many Cranbook students to break the barriers of visual design like Fella did.

Fella's work is largely an intervention in how it mixes high art and contemporary culture to produce unique art. According to Lorraine Wild, a 2006 AIGA medalist:

“Ed's work marks a sea change in graphic design,”. “He introduced ambivalence and ambiguity, the multiple meanings of design as text and subtext, and that graphic designers are really artists.

The contents of this page are sourced from Wikipedia article on 21 May 2020. The contents are available under the CC BY-SA 4.0 license.
View Edward Fella 's image gallery
Image Gallery 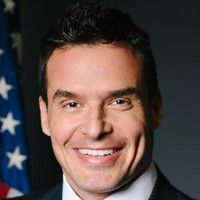