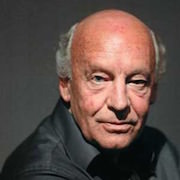 Eduardo Hughes Galeano ([eˈðwaɾðo ɣaleˈano]; 3 September 1940 – 13 April 2015) was an Uruguayan journalist, writer and novelist considered, among other things, "global soccer's pre-eminent man of letters" and "a literary giant of the Latin American left".

Author Isabel Allende, who said her copy of Galeano's book was one of the few items with which she fled Chile in 1973 after the military coup of Augusto Pinochet, called Open Veins of Latin America, "a mixture of meticulous detail, political conviction, poetic flair, and good storytelling."

Eduardo Germán María Hughes Galeano was born in Montevideo, Uruguay, on Sept. 3, 1940. His two family names were inherited from Welsh and Italian (from Genoa) great-grandfathers; the other two were from Germany and Spain. Galeano wrote under his maternal family name; as young man, he briefly wrote for an Uruguayan socialist publication, El Sol, signing articles as "Gius," "a pseudonym approximating the pronunciation in Spanish of his paternal surname Hughes." Galeano's family belonged to the fallen Uruguayan aristocracy; Galeano himself went to work at fourteen, having completed just two years of secondary school.

He started his career as a journalist in the early 1960s as editor of Marcha, an influential weekly journal which had such contributors as Mario Vargas Llosa, Mario Benedetti, Manuel Maldonado Denis and Roberto Fernández Retamar. For two years he edited the daily Época and worked as editor-in-chief of the University Press. In 1959 he married his first wife, Silvia Brando, and in 1962, having divorced, he remarried to Graciela Berro.

In 1973, a military coup took power in Uruguay; Galeano was imprisoned and later was forced to flee, going into exile in Argentina where he founded the magazine Crisis. His book Open Veins of Latin America was banned by the right-wing military government, not only in Uruguay, but also in Chile and Argentina. In 1976 he married for the third time to Helena Villagra; however, in the same year, the Videla regime took power in Argentina in a bloody military coup and his name was added to the list of those condemned by the death squads. He fled again, this time to Spain, where he wrote his famous trilogy, Memoria del fuego (Memory of Fire), described as "the most powerful literary indictment of colonialism in the Americas."

At the beginning of 1985 Galeano returned to Montevideo when democratization occurred. Following the victory of Tabaré Vázquez and the Broad Front alliance in the 2004 Uruguayan elections marking the first left-wing government in Uruguayan history Galeano wrote a piece for The Progressive titled "Where the People Voted Against Fear" in which Galeano showed support for the new government and concluded that the Uruguayan populace used "common sense" and were "tired of being cheated" by the traditional Colorado and Blanco parties. Following the creation of TeleSUR, a Latin American television station based in Caracas, Venezuela, in 2005 Galeano along with other left-wing intellectuals such as Tariq Ali and Adolfo Pérez Esquivel joined the network's 36 member advisory committee.

On February 10, 2007, Galeano underwent a successful operation to treat lung cancer. During an interview with journalist Amy Goodman following Barack Obama's election as President of the United States in November 2008, Galeano said, "The White House will be Barack Obama's house in the time coming, but this White House was built by black slaves. And I’d like, I hope, that he never, never forgets this". At the 17 April 2009 opening session of the 5th Summit of the Americas held in Port of Spain, Trinidad and Tobago, Venezuelan President Hugo Chávez gave a Spanish-language copy of Galeano's Open Veins of Latin America to U.S. President Barack Obama, who was making his first diplomatic visit to the region.

In a May 2009 interview he spoke about his past and recent works, some of which deal with the relationships between freedom and slavery, and democracies and dictatorships: "not only the United States, also some European countries, have spread military dictatorships all over the world. And they feel as if they are able to teach democracy". He also talked about how and why he has changed his writing style, and his recent rise in popularity.

In April 2014 Galeano gave an interview at the II Bienal Brasil do Livro e da Leitura in which he regretted some aspects of writing Las Venas Abiertas de América Latina, saying

"Time has passed, I've begun to try other things, to bring myself closer to human reality in general and to political economy specifically. 'The Open Veins' tried to be a political economy book, but I simply didn't have the necessary education. I do not regret writing it, but it is a stage that I have since passed."

This interview was picked up by many critics of Galeano's work in which they used the statement to reinforce their own criticisms. However, in an interview with Jorge Majfud he said,

"The book, written ages ago, is still alive and kicking. I am simply honest enough to admit that at this point in my life the old writing style seems rather stodgy, and that it's hard for me to recognize myself in it since I now prefer to be increasingly brief and untrammeled. [The] voices that have been raised against me and against The Open Veins of Latin America are seriously ill with bad faith."

"Fleas dream of buying themselves a dog, and nobodies dream of escaping poverty: that, one magical day, good luck will suddenly rain down on them – will rain down in buckets. But good luck doesn’t rain down, yesterday, today, tomorrow or ever. Good luck doesn’t even fall in a fine drizzle, no matter how hard the nobodies summon it, even if their left hand is tickling, or if they begin the new day on their right foot, or start the new year with a change of brooms. The nobodies: nobody’s children, owners of nothing. The nobodies: the no-ones, the nobodied, running like rabbits, dying through life, screwed every which way. Who are not, but could be. Who don’t speak languages, but dialects. Who don’t have religions, but superstitions. Who don’t create art, but handicrafts. Who don’t have culture, but folklore. Who are not human beings, but human resources. Who do not have faces, but arms. Who do not have names, but numbers. Who do not appear in the history of the world, but in the crime reports of the local paper. The nobodies, who are not worth the bullet that kills them."

Las venas abiertas de América Latina (Open Veins of Latin America), a history of the region from the time of Columbus from the perspective of the subjugated people, is considered one of Galeano's best-known works. An English-language translation by Cedric Belfrage gained some popularity in the English-speaking world after Venezuelan President Hugo Chávez gave it as a gift to U.S. President Barack Obama in 2009.

Galeano was also an avid fan of football, writing most notably about it in Football in Sun and Shadow (El fútbol a sol y sombra). In a retrospective for SB Nation after Galeano's death, football writer Andi Thomas described the work—a history of the sport, as well as an outlet for the author's own experiences with the sport and his political polemics—as "one of the greatest books about football ever written".

Galeano died on 13 April 2015 in Montevideo from lung cancer at the age of 74, survived by third wife Helena Villagra and three children.

The contents of this page are sourced from Wikipedia article on 08 Mar 2020. The contents are available under the CC BY-SA 4.0 license.
View Eduardo Galeano 's image gallery
Image Gallery 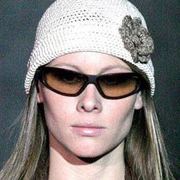