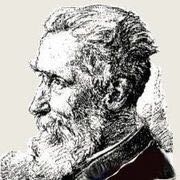 Eduard Georg Seler (December 5, 1849 – November 23, 1922) was a prominent German anthropologist, ethnohistorian, linguist, epigrapher, academic and Americanist scholar, who made extensive contributions in these fields towards the study of pre-Columbian era cultures in the Americas. He is most renowned for his foundational studies concerning the ethnography, documents and history of Mesoamerican cultures, for which he is regarded as one of the most influential Mesoamericanist scholars active around the turn of the 20th century. Seler laid many fundamentals in understanding and deciphering the aztec pictorial script. A main contribution was the re-discovery and analysis of the basic aztec calendar system: the existence of two aztec calendars, a 365-day solar profane (everyday use) resp. a 263-day lunar religious calendar. He also noted from the sources, that the ceremonial killing victim figures alleged by Spanish priests and military (10.000s or even 100.000s, repeatedly) in their chronicles were most probably vastly exaggerated propaganda. Much later, that was confirmed by excavations end of the 20th century.

Being poor and of ailing health, he was helped and supported for decades by his wife Cäcilie (Cecilia) Seler-Sachs (1855–1935, financially (she was the daughter of Dr Sachs, a wealthy MD), physically (during their long, hard, and insecure travels), and intellectually. Her photos of Aztec temples and pyramids are still useful to scientists, and after her husband's death she went on verifying his works, and publishing them. On the spot, the Selers were helped by Mexican scholar and historian Antonio Peñafiel.

The contents of this page are sourced from Wikipedia article on 08 Mar 2020. The contents are available under the CC BY-SA 4.0 license.
View Eduard Seler 's image gallery
Image Gallery