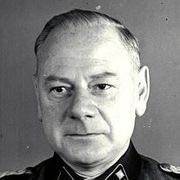 Eduard Krebsbach (8 August 1894 – 28 May 1947) was a former German physician and SS doctor in the Nazi concentration camp in Mauthausen from July 1941 to August 1943. He was executed for crimes against humanity committed at the Mauthausen camp.

In the autumn of 1941, Krebsbach became Standortarzt (garrison doctor) of Mauthausen concentration camp, tasked with supervising medical care and all medical personnel of the camp. He was responsible for initiating mass killing by lethal injection to the heart on handicapped and sick prisoners. Under his supervision approximately 900 Russian, Polish and Czech prisoners were murdered by lethal injections of gasoline. Because of this inmates nicknamed him 'Dr Spritzbach' (Dr Injection). Krebsbach was also responsible for the construction of a gas chamber in the basement of the hospital in the Mauthausen camp.

Krebsbach often inspected the prisoners and conducted selections for execution. A former inmate recalled Krebsbach's actions during such an inspection: "As the senior SS doctor in the camp, Dr Krebsbach sometimes came to block 5 and had the still surviving Jews paraded before him. He then asked if any of them were doctors. If there were, he would say: 'You Jewish pig, you’re just an abortionist.' The next day they were done away with by the kapos. If a Jewish inmate was lying on the floor with a broken limb - a not uncommon occurrence at work - he was usually thrown over a wall by a kapo. If Dr Krebsbach were passing, he would say ironically: 'Yes, this broken foot is a hopeless case.'"

Krebsbach was transferred to the Kaiserwald concentration camp in Latvia during the autumn of 1943, as it is believed he shot Josef Breitenfellner in his home. Breitenfellner was a German soldier from Langenstein on vacation when he and his friends awoke Krebsbach from his sleep on 22 May 1943. Here he conducted selections by forcing the prisoners to perform physical exercises to check their strength and then identifying the two thousand weakest to be killed.

Following the camp's closure, Krebsbach resumed a career as “Epidemic Inspector for Latvia, Estonia and Lithuania”. Soon after he transferred to the regular army as a senior staff doctor, serving until late 1944. However this was short lived and at the end of 1944 he left the army and worked once again as a company doctor in a spinning mill in Kassel.

Following the end of World War II he was arrested and given the death penalty during the Dachau trials conducted by the US military on 13 May 1946 and was executed by hanging on 28 May 1947 at Landsberg Prison in Landsberg am Lech.

The following is from the court record of the Dachau trials (quoted in Hans Maršálek, "Die Geschichte des Konzentrationslagers Mauthausen", p. 174):

Krebsbach: When I started work I was ordered by the head of Office III D to kill or have killed all those who were unable to work, and the incurably sick.

Prosecutor: And how did you carry out this order?

Krebsbach: Incurably sick inmates who were absolutely incapable of work were generally gassed. Some were also killed by gasoline injection.

Prosecutor: To your knowledge, how many persons were killed in this way in your presence?

Prosecutor: You were ordered to kill those unfit to live?

Krebsbach: Yes. I was ordered to have persons killed if I was of the opinion that they were a burden on the state.

Prosecutor: Did it never occur to you that these were human beings, people who had the misfortune to be inmates or who had been neglected?

Krebsbach: No. People are like animals. Animals that are born deformed or incapable of living are put down at birth. This should be done for humanitarian reasons with people as well. This would prevent a lot of misery and unhappiness.

Prosecutor: That is your opinion. The world does not agree with you. Did it never occur to you that killing a human being is a terrible crime?

Krebsbach: No. Every state is entitled to protect itself against asocial persons including those unfit to live.

Prosecutor: In other words, it never occurred to you that what you were doing was a crime?

Krebsbach: No. I carried out my work to the best of my knowledge and belief because I had to.