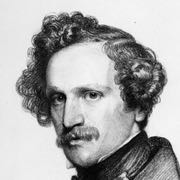 Bendemann was born in Berlin. His father, Anton Heinrich Bendemann, was a Jewish banker. His mother, Fanny Eleonore Bendemann née von Halle, was a daughter of the Jewish banker Joel Samuel von Halle. His father monitored his education closely and it would have naturally led him to some sort of technical occupation, but his talent and propensity towards art resulted in his being allowed to pursue other interests. After he completed elementary school, he enrolled in the Wilhelm von Schadow's school in Düsseldorf. In 1828 he painted a portrait of his grandmother which attracted some attention. In 1830 he went on a school trip to Italy where he remained for a year.

After a series of jobs, among them with Boas and Ruth, his talent as an artist began to show, especially with his very large 1832 painting titled, The Jews Mourning in Exile which was featured in the Berlin art exhibition. The picture garnered a great deal of attention, which was in part due to the deep and simple feeling and the noble composition of the piece, and finally went to the Wallraf-Richartz Museum in Cologne. Bendemann's second picture, The Two Girls at the Well (1832), was acquired by the North Rhine-Westphalia Art Association. Soon thereafter followed Jeremiah amid the Ruins of Jerusalem for which the artist received a medal in Paris in 1837. This painting was for the most part about the progress of the Jews in Babylon. (Royal Palace in Hanover). His best known work is The Harvest. The artist’s first fresco was a symbolic representation of the art at the “Poetry Well” at the house of his parents-in-law in Berlin.

In the year 1838, Bendemann was appointed professor of the Dresden Academy of Fine Arts. He soon had the opportunity to paint even larger frescos. He was commissioned to decorate three halls of the Dresden royal palace with wall paintings: the throne room, the tower room, and the tower hall. In the throne room, on both sides of the throne, there are representations of important rulers and legislators in gold leaf with smaller representations in relief form below, from Moses up to Albert III, Duke of Saxony. On the wall facing the throne there are four paintings depicting events from the life of King Heinrich I each with other pictures attached which explain each of the four events. This exacting work occupied the greater part of his time for fifteen years. From 1859 to 1867, he was director of the Düsseldorf Academy.

The contents of this page are sourced from Wikipedia article on 08 Mar 2020. The contents are available under the CC BY-SA 4.0 license.
View Eduard Bendemann 's image gallery
Image Gallery