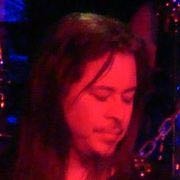 Eddie Jackson (born January 29, 1961), also known as EdBass and One Take, is an American bass guitarist for the progressive metal band Queensrÿche, which he co-founded in 1982.

Jackson was born in Robstown, Texas. He began playing the acoustic guitar at age 14. Two years later, he switched to electric guitar and bass guitar. He also experimented with singing and drums. Jackson met drummer Scott Rockenfield in late 1979 at Redmond High School, and joined Rockenfield's band Cross+Fire in 1980. The band's name later was changed to The Mob, and in 1982 to Queensrÿche. Jackson has been with the band since, and is notoriously known for putting pranks on the inside of album covers, especially in the liner notes.

Jackson endorsed Kramer basses during the mid-1980s, until Kramer bought out Spector. The NS-2s were his primary bass guitars throughout the late 1980s and into the 1990s, and were among others used on Operation: Livecrime, until his black Spector was stolen in the mid-'90s, after which Jackson retired his white model from touring, and switched to using Spector's Euro 5LX and ReBop bass guitars. Jackson briefly endorsed Fernandes basses from 1994 to 1996, during Queensrÿche's Promised Land tour, before endorsing Bellevue-based master luthier Michael Lull, who had done all of the repair and upkeep work on Queensrÿche's guitars. He also used a rackmount Line 6 Bass Pod Pro at some point as well in the lat 90's and early 2000's.

The contents of this page are sourced from Wikipedia article on 27 Apr 2020. The contents are available under the CC BY-SA 4.0 license.
View Eddie Jackson 's image gallery
Image Gallery