Friedrich August Eberhard von Mackensen (24 September 1889 – 19 May 1969) was a German general of the Wehrmacht during World War II who served as commander of the 1st Panzer Army and the 14th Army, and was a recipient of the Knight's Cross of the Iron Cross with Oak Leaves. Following the war, Mackensen stood trial for war crimes before a British military tribunal in Italy where he was convicted and sentenced to death, however the sentence was later commuted and Mackensen was released in 1952, and died in West Germany in 1969.

Eberhard was born on 24 September 1889, in Bromberg, Kingdom of Prussia, German Empire, the fourth of five children to Field Marshal August von Mackensen and his wife Dorothea (née von Horn). Mackensen joined the Imperial German Army in 1908, where he became a Fahnenjunker of the XVII Corps stationed in Danzig, and was promoted to lieutenant on 22 March 1910.

At the outbreak of the First World War in 1914, Mackensen served as a regimental adjutant in the 1st Hussar Regiment. On 25 February 1915, he was promoted to first lieutenant, but after a severe wound on 23 August 1915, Mackensen was transferred to a staff job in the General Staff of the Army Group Scholtz. On 20 May 1917, he was promoted to captain.

Following the armistice in 1918 ending the war, Mackensen remained in the army (now the Reichswehr of the Weimar Republic) where he served as chief of the 1st squadron of the 5th (Prussian) Rider Regiment in Belgard, but in 1919 also joined the Freikorps paramilitary group and fought in the Baltic states. In 1925, Mackensen was commanded the army transport department of the German General Staff of the Ministry of the Reichswehr in Berlin. After his appointment as a major on 1 February, 1928, he served from 1930 in the staff of the 1st Cavalry Division in Frankfurt (Oder), and while serving in this position was promoted on 1 October 1932, to lieutenant colonel

From 1 November 1933, Mackensen was made chief of the staff of the General Inspectorate of the Cavalry, and was promoted to colonel on 1 September 1934. Mackensen became chief of staff of the X Army Corps in Hamburg, the successor of the cavalry in the newly-formed Wehrmacht. In 1937, Mackensen became commander of the 1st Cavalry Brigade in Insterburg. Mackensen was appointed major general on 1 January 1938, and on 1 May 1939 became commander in the Army Group Command V in Vienna, where he became chief of staff under Field Marshal Wilhelm List.

At the beginning of World War II in September 1939, Mackensen served as the chief of staff of the German 14th Army in the invasion of Poland. Later, he was made chief of staff of the 12th Army and fought in France. On 1 January 1940, he was promoted to lieutenant general and eight months later to General der Kavallerie. On 15 January 1941, Mackensen was made commanding general of III Army Corps under the 1st Panzer Army in Army Group South, and on 27 July 1941, received the Knight's Cross of the Iron Cross. Mackensen's forces were the first to reach Kiev at the First Battle of Kiev during the German invasion of the Soviet Union. In November 1942, when General Paul Ewald von Kleist was given the command of Army Group A, Mackensen took up leadership of the 1st Panzer Army in the Third Battle of Kharkov in March 1943. For his achievements in the Second Battle of Kharkov, Mackensen was honored on 26 May 1942 with the Oak Leaves added to his Iron Cross award, and promoted to colonel general (Generaloberst) on 6 July 1943.

Shortly after his promotion to Generaloberst, Mackensen was transferred to Italy as commander of the 14th Army. After the Allies broke through the Winter Line during Operation Diadem, Kesselring fired Mackensen for disobeying orders and Mackensen retired from active service in the army in the summer of 1944.

On 24 March 1944, SS members shot and killed 335 Italian civilians in the Ardeatine Caves massacre in retaliation for the deaths of 32 German soldiers in a bomb attack. This war crime was ordered by Adolf Hitler in consultation with Generaloberst Alfred Jodl and Field Marshal Albert Kesselring. Mackensen was at this time commander of the 14th Army and subordinate to Kesselring as well as the superior of Lieutenant-General Kurt Mälzer, military commandant of Rome. All three were convicted of war crimes.

Following the unconditional surrender of Nazi Germany in 1945 Mackensen became a prisoner of war, and on 30 November 1946 was convicted of war crimes by a British military court in Rome, where he was sentenced to death. In mid-1947, his sentence was commuted to 21 years imprisonment. He was released on 2 October 1952 after serving five years. After his release, Mackensen lived a secluded life in Alt Mühlendorf (now in Warder in Rendsburg-Eckernförde district) near Nortorf in Schleswig-Holstein, West Germany. 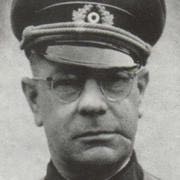