Eberhard Taubert (11 May 1907 in Kassel – 2 November 1976 in Cologne) was a lawyer and anti-Semitic Nazi propagandist. He joined the Nazi party in 1931, and quickly became involved in both anti-Communist and anti-Jewish propaganda. From 1933 to 1945 he worked as a high official in the Propagandaministerium under Joseph Goebbels.

His nickname in Nazi circles was Dr. Anti. He worked in 1940 on the script for the anti-Semitic propaganda film Der ewige Jude (English: The Eternal Jew) and was responsible for the law requiring Jews to wear the yellow badge (Judenstern).

After the war he worked for $3,000 a month for the German Christian Democratic Party, providing material against more radical Marxists. After 1957 he worked in South America, Iran, Lebanon, Egypt and South Africa and as the counsel of the German minister Franz Josef Strauß. From 1970 he was employed by German industrialists.

His rhetorical ability made him the talented and wanted propagandist he was, not only during the NS-regime. His agitative style used in the Nazi propaganda was reused after the war to boost the Western fear of communism. For this mission he worked with secret services (for example CIC) and right-wing politicians and journals. 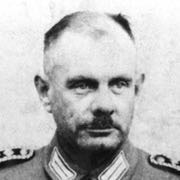