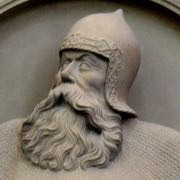 Eberhard II was son of Count Ulrich III of Württemberg and Sofie of Pfirt. He married Countess Elizabeth von Henneberg-Schleusingen on September 17, 1342.

They had two children:

From the beginning of his regency in 1344 up to 1361 he reigned together with his brother Ulrich IV, whom he forced to sign a treaty which confirmed the inseparability of Württemberg. Soon afterwards Ulrich IV renounced his co-rule on May 1, 1362. To strengthen his might and to enlarge the territory of Württemberg Eberhard II joined several pacts and clashes with Emperor Charles IV. As a result, he and his brother received extra privileges, for example a sole jurisdiction, which gave more autonomy to the County of Württemberg.

A sensation was created 1367 by the assault of Count Wolf von Eberstein on Eberhard II and his son Ulrich during their stay "in Wildbad" (presumably Wildbad or Teinach). Both fled and seized Neueberstein Castle immediately with a large number of men. However this siege turned out to be unsuccessful.

During his regency he strongly aligned his policy against the Free Imperial Cities, which stood in the way of the extension of Württemberg's territory. He fought battles against the towns united in the Schwäbischer Städtebund (Swabian City League) in 1376, 1372 in Altheim, 1377 in Reutlingen and 1388 near Döffingen. The result of this was a stalemate which secured the independency of the towns. Nevertheless, the territorial gains during his rule were substantial, for example Böblingen and Calw.