Ebenezer McBurney Byers (April 12, 1880 – March 31, 1932) was a wealthy American socialite, athlete, and industrialist. He won the 1906 U.S. Amateur in golf. He earned notoriety in the early 1930s when he died from multiple radiation-induced cancers after consuming Radithor, a popular patent medicine made from radium dissolved in water. 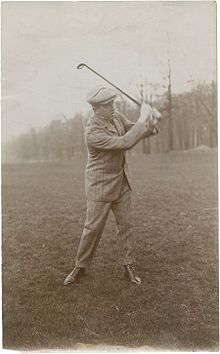 The son of industrialist Alexander Byers, Eben Byers was educated at St. Paul's School and Yale College, where he earned a reputation as an athlete and ladies' man. He was the U.S. Amateur golf champion of 1906, after finishing runner-up in 1902 and 1903. Byers eventually became the chairman of the Girard Iron Company, which had been created by his father.

In 1927 Byers injured his arm falling from a railway sleeping berth. For the persistent pain a doctor suggested he take Radithor, a patent medicine manufactured by William J. A. Bailey. Bailey was a Harvard University dropout who falsely claimed to be a doctor of medicine and had become rich from the sale of Radithor, a solution of radium in water which he claimed stimulated the endocrine system. He offered physicians a 1/6 kickback on each dose prescribed.

Byers began taking several doses of Radithor per day, believing it gave him a "toned-up feeling", but stopped in October 1930 (after taking some 1400 doses) when that effect faded. He lost weight and had headaches, and his teeth began to fall out. In 1931 the Federal Trade Commission asked him to testify about his experience, but he was too sick to travel so the commission sent a lawyer to take his statement at his home; the lawyer reported that Byers's "whole upper jaw, excepting two front teeth, and most of his lower jaw had been removed", and that "All the remaining bone tissue of his body was disintegrating, and holes were actually forming in his skull."

His death on March 31, 1932, was attributed to "radiation poisoning" using the terminology of the time, but it was due to cancers, not acute radiation syndrome. He is buried in Allegheny Cemetery in Pittsburgh, Pennsylvania, in a lead-lined coffin.

Byers's death received much publicity and it heightened awareness of the dangers of radioactive "cures".

The Federal Trade Commission issued an order against Bailey's business to "cease and desist from various representations theretofore made by them as to the therapeutic value of Radithor and from representing that the product Radithor is harmless". He later founded the "Radium Institute" in New York and marketed a radioactive belt-clip, a radioactive paperweight, and a mechanism which purported to make water radioactive.

Note: Byers died before the founding of the Masters Tournament, and never played in The Open Championship. As an amateur, he could not play in the PGA Championship.
NT = No tournament
DNP = Did not play
DNQ = Did not qualify for match play portion
R256, R128, R64, R32, R16, QF, SF = Round in which player lost in match play
"T" indicates a tie for a place
Green background for wins. Yellow background for top-10