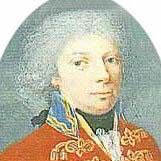 William Frederick Philip, Duke of Württemberg (27 December 1761, Stettin – 10 August 1830, Schloss von Stetten im Remstal) was a prince of the House of Württemberg and a minister for war.

In 1779 he joined the Royal Danish Army and quickly rose to the rank of Oberst. In 1781 he commanded his own regiment, being promoted to major general in 1783, moved to the Danish Foot Guards in 1785 and promoted to lieutenant general in 1795. In 1801 he became governor of Copenhagen and later the same year faced the Battle of Copenhagen in that role.

In 1806 he paid 10,000 Reichstaler to leave the Danish army. His brother Frederick had just been made king of Württemberg and in Stuttgart made William a field marshal and Württemberg's minister for war. From 1810 to 1821 William temporarily lived in his manor house at Hirrlingen near Rottenburg but more often in the Schloss Stetten in Remstal. On 29 June 1811 he took on Freiherr Friedrich von Phull as vice-president of the War Department (and de facto Minister for War, though William remained minister de jure until 1815).

In 1815, on leaving office, William shifted to studying science and successfully practised as a physician. In 1817 the University of Tübingen awarded him an honorary degree in medicine. As a member of the royal house of Württemberg, William also held a seat in the Kammer der Standesherren (House of Lords) of the Württembergische Landstände parliament from 1819 to his death in 1830.

On 23 August 1800, in Coswig, Frederick married one of his mother's ladies in waiting, Wilhelmine Freiin von Tunderfeld-Rhodis (1777–1822), daughter of Baron Karl August Wilhelm von Tunderfeld-Rhodis. She was a scion of a military family from Sweden, originally from the Baltic.

The couple had six children, only three of whom reached adulthood: