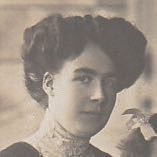 Duchess Marie of Mecklenburg
The basics

As a young woman Marie became pregnant by a palace servant. The servant, a married man named Hecht, was responsible for turning off the gas-lights in the bedrooms of the grand ducal children. Several of Marie's cousins, including the future King George V of the United Kingdom and William II, German Emperor, thought that Marie had been "hypnotised", while Queen Victoria of the United Kingdom thought that Marie had been "drugged". Hecht was dismissed from service on the charge of stealing; his subsequent lawsuit against the grand ducal family made the details of the story public. The story made radical newspaper headlines in its day.

A daughter was born to Marie in 1898; she was raised under the protection of Marie's grandmother, Grand Duchess Augusta of Mecklenburg-Strelitz (born Princess Augusta of Cambridge).

Marie went to France where she met Count George Jametel (1859–1944), the son of Ernest Jametel, a banker and patent medicine manufacturer, and nephew of the politician Gustave-Louis Jametel; he had received the title of Papal Count from Pope Leo XIII in 1886. The acquaintance proceeded at a brisk pace, and Marie and George were married on 22 June 1899, only one year after the birth of Marie's illegitimate child. The wedding was held at the Catholic Chapel of St. Elizabeth in Richmond Park, near White Lodge, the home of Marie's great-aunt, the Duchess of Teck (born Princess Mary Adelaide of Cambridge). A second Anglican wedding ceremony was held the same day at the Parish Church of Kew. In spite of the fact that the marriage was morganatic, many members of Marie's family attended the wedding, including her grandparents, parents, and three siblings. The wedding breakfast was given by her great-uncle the Duke of Cambridge at Cambridge Cottage, Kew.

Marie and George received a large financial settlement ($200,000) from Marie's father. They lived in the Faubourg St. Germain in Paris. They had two children:

Marie's husband George had several affairs, most notoriously with the married Infanta Eulalia of Spain, daughter of Isabella II of Spain. In January 1908, Marie applied for a divorce from George. She accused the Count of having married her for her money, and of having continued his affair with Princess Eulalia. When the matter went to court, Marie's own scandalous past, as the unwed mother of a manservant's child, was revealed and thrown in her face; as a result, Marie's family suffering much public disgrace. In August the same year, while the case was still proceeding in court, Marie's youngest brother, the nineteen-year-old Duke Karl Borwin of Mecklenburg, felt moved to challenge his brother-in-law to a duel, supposedly in defence of Marie's honour. The duel took place, and it was Marie's brother, Karl Borwin, who was killed. Marie and George were divorced 31 December 1908. Having lost her fortune due to the divorce, Marie resumed the use of her Mecklenburg title and lived in the Blasewitz section of Dresden.

After their marriage Marie and Julius lived in Blasewitz. They had two children:

Marie died at the age of seventy in Oberkassel near Bonn. She is buried with her second husband in the Lippe family mausoleum at Heisterbach Abbey.

The contents of this page are sourced from Wikipedia article on 08 Mar 2020. The contents are available under the CC BY-SA 4.0 license.
View Duchess Marie of Mecklenburg 's image gallery
Image Gallery