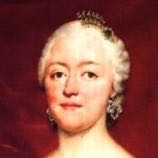 Maria Antonia was born at Nymphenburg Palace in Munich to Archduchess Maria Amalia of Austria and to Elector Karl Albert of Bavaria (later Emperor Karl VII). Throughout her life she received an outstanding education, particularly in the arts (including painting, writing poetry, as well as music).

She was the fourth of seven children of the Elector and his wife.

In Munich on 13 June 1747 (by proxy) and again in Dresden on 20 June 1747 (in person), she married Friedrich Christian, the heir to the Electorate of Saxony; that same year she became a member of the Accademia dell’Arcadia of Rome, a significant institution in operatic reform. With her marriage, she moved to Dresden. She had nine children with Friedrich Christian, seven of whom survived infancy.

She left Dresden during the Seven Years' War and took refuge in Prague and Münich (1759), but returned at her husband Friedrich Christian's accession to the throne in 1763. He died ten weeks later, and their son Frederick Augustus succeeded him. Her son being a minor, she served as joint Regent with her brother-in-law Franz Xavier (1730–1806) until her son reached legal majority in 1768. During her regency, she opposed her co-regent's act to give up her son's claim on the Polish throne in 1765. She also founded a textile factory (1763) and a brewery (1766).

While in Munich, Maria Antonia studied music with renowned opera composers Giovanni Battista Ferrandini and Giovanni Porta. After moving to Dresden she continued her studies with Nicola Porpora and Johann Adolph Hasse. Indeed, opera played a major part throughout Maria Antonia’s life. The court of Munich celebrated her birth with a performance of the opera Amadis de Grecia (Pietro Torri). Her betrothal to Friedrich Christian was likewise celebrated with opera performances, including Hasse’s La Spartana generosa, sets by Bibiena, and Gluck’s opera Le nozze d’Ercole e d’Ebe. Shortly after moving to Dresden, she penned the libretto for Hasse’s oratorio, La conversione di Sant’Agostino (1750), in addition to her composing work. Her own compositional style shows a strong affinity for that of Hasse, especially his conception of opera seria. She also performed actively as a singer and keyboard player in court performances, including leading roles in both of her operas. In addition to her two operas, a number of arias, a pastorale, intermezzos, meditations and motets are attributed to her.

The Amazon queen Thalestris appears in numerous works from Greek mythology, and, like many such stories and mythic cycles, it became a frequent subject for works through the late Middle Ages and beyond. The French poet Gautier de Coste LaCalprenède revived the tale in the novel Cassandre (1644–1650), though the story was altered from the semi-historical account involving Alexander the Great to one involving Orontes, Prince of the Massagetes, as the male foil to Talestris.

Several operas took on the same subject matter over the next century, with Maria Antonia crafting her own libretto and music. The plot centers on Talestris’ relationship with a Scythian ruler (and man), Orontes, as in LaCalprenède’s version. In addition to the title character, two other prominent characters are women: Antiope, her advisor, who also falls in love with a Scythian man, Learchus; and Tomiris, the high priestess of Diana, who is—as revealed near the end of the opera—the mother of Orontes. Ultimately, the plot ends happily, with each couple united and war averted, as the Scythians and Amazons manage to peacefully co-exist. The depiction of the benevolent, thoughtful ruler Talestris coming-of-age as a political leader suggests the possibility that the opera is a semi-autobiographical rendering of Maria Antonia herself.

Although published using the pseudonym ETPA, standing for Ermelinda Talea Pastorella Arcadia, Maria Antonia’s operas were successfully published by Breitkopf and enjoyed warm reviews both in their premieres at the court theater, which she sang in, and also throughout other European cities. Music critic Charles Burney praised her opera and her singing in his 1773 work, The present state of music in Germany, the Netherlands and United Provinces. Also of note, the philosopher and music theorist, Antonio Eximeno y Pujades included an aria from Talestri in his 1774 treatise Dell’ origine e delle regole della musica, putting her in the company of five other selected composers: Palestrina, Nanini, Clari, Pergolesi, and Corelli. Although her music is treated somewhat more broadly with less musical analysis, the entire treatise is used to model compositional techniques, implying a high regard for her work by Antonio Eximeno y Pujades, and presumably other contemporaries.

The contents of this page are sourced from Wikipedia article on 08 Mar 2020. The contents are available under the CC BY-SA 4.0 license.
View Duchess Maria Antonia of Bavaria 's image gallery
Image Gallery

Rector of the University of Munich and SS member