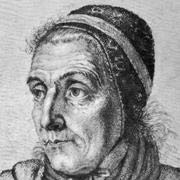 Dorothea Viehmann (November 8, 1755 – November 17, 1816) was a German storyteller. Her stories were an important source for the fairy tales collected by the Brothers Grimm. Most of Dorothea Viehmann's tales were published in the second volume of Grimms' Fairy Tales.

Dorothea Viehmann was born as Katharina Dorothea Pierson in Rengershausen near Kassel as the daughter of a tavern owner. Her paternal ancestors were persecuted Huguenots who fled from France to Hesse-Kassel after the Edict of Nantes was revoked. As she grew up, Viehmann picked up numerous stories, legends and fairy tales from the guests of her father's tavern.

In 1777 Dorothea Pierson married the tailor Nikolaus Viehmann. From 1787 to 1798 the family lived in Niederzwehren, today part of the city of Kassel. After the death of her husband, she had to provide for herself and her seven children by selling products from her garden at the local market.

She became acquainted with the Brothers Grimm in 1813 and told them more than forty tales and variations. Because of Viehmann's Huguenot ancestors, a number of her stories are based on French fairy tales. Wilhelm Grimm wrote that it was an amazing coincidence that he and his brother had met this woman. The brothers were especially impressed that Dorothea could retell her stories again and again without changing a word. There are, however, several examples of her stories which remained incomplete.

A number of stories in Grimms' Fairy Tales are likely to trace back to Dorothea Viehmann:

The abbreviation "KHM" refers to the collection's original title Kinder- und Hausmärchen. The Brothers Grimm marked those texts tracing back to Dorothea Viehmann with the comment "aus Zwehrn" ("from Zwehrn", short for "Niederzwehren").

The historical part of Niederzwehren is today also called Märchenviertel, Fairy Tale Quarter, in honour of the famous storyteller. Memorial signs on two timber-framed houses indicate where Dorothea Viehmann used to live between 1787 and 1798 and from 1798 until her death.

The primary school in the neighbourhood is named after Dorothea Viehmann. A park which has recently been created also bears the name of the storyteller.

The tavern and brewery owned by Dorothea Viehmann's father is now run by the local Hütt brewery. It is located next to the Bundesautobahn 49 near the motorway junction Kassel-West at Baunatal-Rengershausen.

In 2009, a memorial of Dorothea Viehmann by the artist Berahna Massoum was installed close to the Fairy Tale Quarter.

The contents of this page are sourced from Wikipedia article on 09 Mar 2020. The contents are available under the CC BY-SA 4.0 license.
View Dorothea Viehmann 's image gallery
Image Gallery