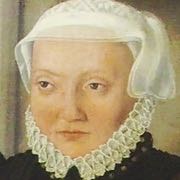 Dorothea Susanne of Simmern
The basics

Dorothea Susanne of Simmern (15 November 1544 in Simmern – 8 April 1592 in Weimar) was a princess of the Electorate of the Palatinate and by marriage Duchess of Saxe-Weimar.

Dorothea Susanne was the daughter of elector palatine Frederick III (1515–1576) from his marriage to Marie (1519–1567), daughter of Margrave Casimir of Brandenburg-Kulmbach.

She married on 15 June 1560 in Heidelberg Duke John William, of Saxe-Weimar (1530–1573). After their marriage, the couple lived mostly in Weimar. After the death of her husband Elector August of Saxony acted as guardian of her children. This policy was meant to isolate the children from their mother's political and religious influence. She was assigned a new residence outside Weimar, appropriately named New House. The Red Castle in Weimar was built for her from 1574 to 1576. She used it as her widow seat after its completion Its Renaissance portal is decorated with an alliance coat of arms of Dorothea Susanne and her husband.

In 1581, the widowed Duchess turned to write to her brothers, Louis VI and John Casimir to induce the guardian of her eldest son, Elector August in Dresden, to promote the marry her eldest son with a Württemberg princess.

Dorothea Susanne died in 1592 and was buried in the church of St. Peter und Paul in Weimar; her motto was I Know That My Redeemer Lives.

From her marriage, Dorothea Susanne had the following children: