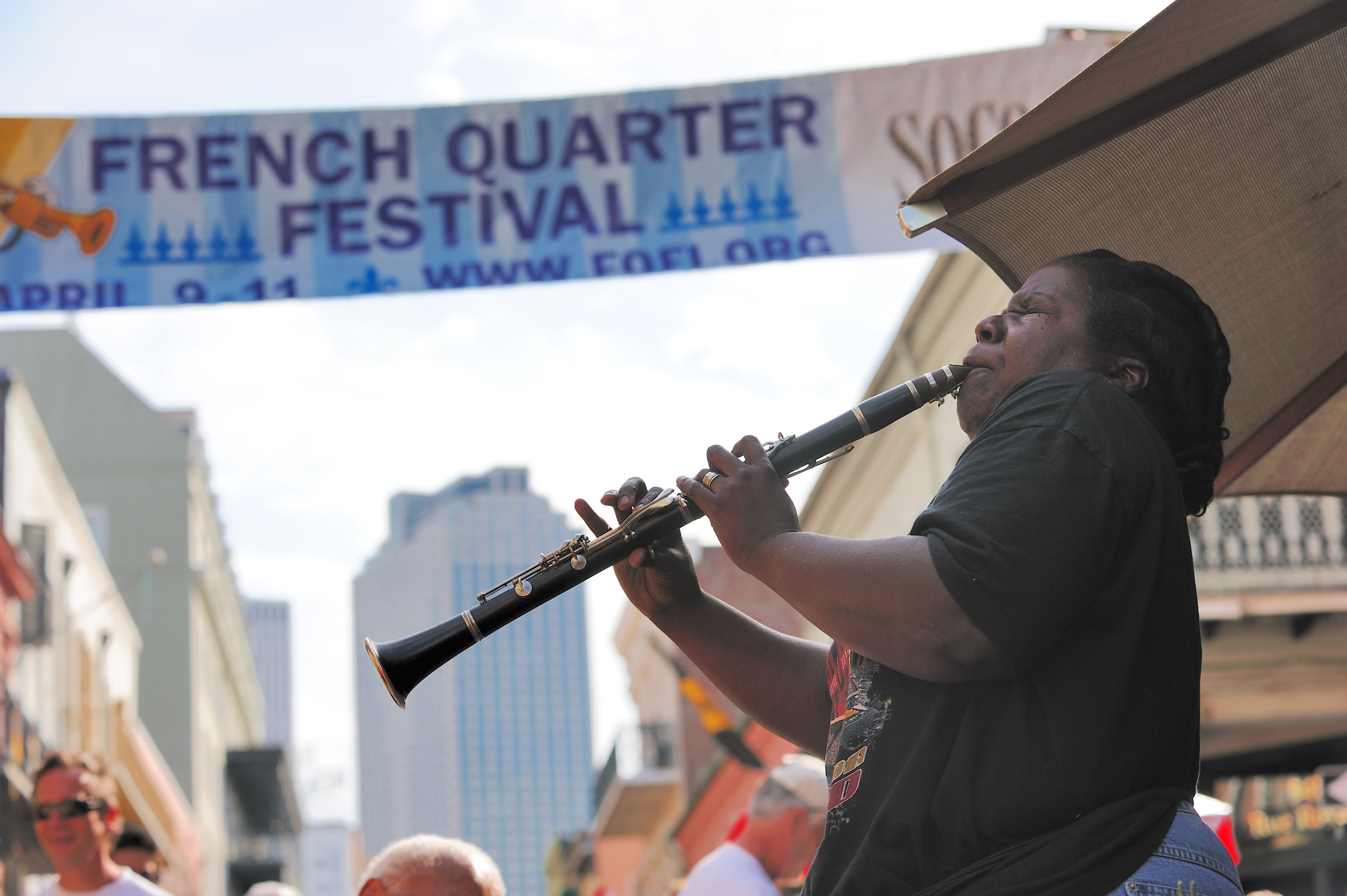 Doreen Ketchens (born October 3, 1966 in New Orleans, Louisiana) is a jazz clarinetist, who performs Dixieland and Trad Jazz. She is one of the first and few female bandleaders in New Orleans, and a musical educator. She has performed at concert halls and music festivals, at U.S. Embassies and decades of weekly performances in Dixieland's tradition in the Royal Street Performing Arts Zone in the French Quarter of New Orleans with her band, Doreen's Jazz New Orleans. Ketchens has performed for four U.S. Presidents: Bill Clinton, George Bush Sr., Ronald Reagan and Jimmy Carter, and is widely considered one of the cultural ambassadors of New Orleans and of the traditional music Nicknamed "Lady Louis" because of her ability to hit and hold powerful high notes, and her love of Armstrong's performance style, she has performed with Ellis Marsalis, Jon Faddis, Trombone Shorty, Al Hirt, Dorothy Donegan, The Black Crows and Jennifer Warnes, and opened for Macy Grey and Dr. John, and has been seen around the world by millions of people via media and fan videos of her performances (See Filmography & Videography, below). She has been featured in numerous documentaries about New Orleans, its music, and its heritage, and she has been seen on television in shows like HBO's Tremé.

Like many of New Orleans' musicians, Ketchens grew up in the Tremé She studied clarinet in elementary school, beginning as a fifth-grader at Joseph Craig Elementary. To get out of a pop quiz, she responded to an announcement asking interested students to come and sign up for the band. Her first choice was flute, but most of the girls picked that instrument, so she opted for the clarinet. In junior high school, her band director, Donald Richardson, stayed on her for not practicing, and there was a boy that she was trying to impress. When she finally did practice, her talent began to emerge. She played for John F. Kennedy High School in New Orleans, and auditioned and was accepted to NOCCA, Louisiana's Arts Conservatory in New Orleans. She began to study with clarinetist Stanley Weinstein.

Doreen attended Delgado Community College, Loyola University of New Orleans, Southern University In New Orleans, and, through scholarships, including one from the New York Philharmonic, University of Hartford's The Hartt School in Hartford, CT, where she studied under Henry Larsen. She had an internship with the symphony in Hartford.

She worked her way through conservatories and college as a chef, and met her husband, arranger and sousaphonist for Doreen's Jazz New Orleans, Lawrence Ketchens at Loyola. She found her passion in Jazz with Lawrence.

She began playing in Jackson Square with her first band, the Jackson Square All-Stars. Their band evolved into "Doreen's Jazz New Orleans," and, after much struggle with the chauvinism of traditional Jazz and club owners, they managed to find a winning formula playing and entertaining crowds via their street shows, Jazz festivals, and then, through direct sales of their music and videos on the Internet. Ketchens has been sharing traditional American Jazz in Africa, Asia, Canada, Europe, South America, Russia and the United States. They have performed with programs sponsored by Jazz at Lincoln Center and The US Department of State.

Doreen introduced her daughter, Dorian Ketchens-Dixon, when she was barely nine, as a drummer at the New Orleans Jazz & Heritage Festival) for one song in a set. Today, she is one of the regular drummers backing the group.

Ketchens' group appears at Jazz Festivals in New Orleans and at music festivals, fairs, and showcases throughout the world. In 2006, she was part of a program for South African cultural exchange with the Field Band Foundation that was sponsored by the U.S. Department of State's Bureau of Educational and Cultural Affairs and Jazz at Lincoln Center in Johannesburg, Durban and Cape Town.

She has been featured in numerous documentaries about New Orleans, its heritage, and its music, including several profiles by WWOZ, New Orleans' Jazz radio station including a video profiles and audio programs, and dozens of articles from major newspapers and magazines around the world.

Doreen's iconic stance, head thrown back, clarinet soaring into the air, has been the subject of hundreds of pieces of art and hundreds of thousands of photos by delighted photographers, professional and amateur capturing the spirit of New Orleans. Fine art featuring her as the subject appear at Harrah's Hotel & Casino in New Orleans, the New Orleans Jazz and Heritage Foundation, a hospital, and many other installations. Fine artists who have used Doreen Ketchens for inspiration include:

Fan and media videos of her performances have been seen globally by millions of people on YouTube and other social media outlets with one video by the NOLA Insider Guide on Facebook reaching more than 3.9M people by October 2015. Professional performances and performances in feature films and television programs include: