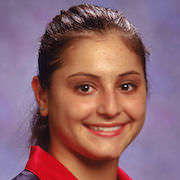 Dominique Helena Moceanu (/moʊˈtʃiːɑːnuː/, moh-CHEE-anoo; [moˈtʃe̯anu]; born September 30, 1981) is an American author and retired gymnast. She was a member of the gold-medal-winning United States women's gymnastics team (the "Magnificent Seven") at the 1996 Summer Olympics in Atlanta.

The hallmarks of Moceanu's gymnastics, in the early part of her elite career, were daring tricks on the balance beam and spunky routines on the floor exercise. Later, under the direction of new coaches, she developed a more elegant, mature style.

Moceanu trained under Marta and Béla Károlyi, and later Luminița Miscenco and Mary Lee Tracy. She earned her first national team berth at age 10 and represented the United States in various international competitions at the junior level. She was the all-around silver medalist at the 1992 Junior Pan American Games and the 1994 junior national champion. In 1995, at the age of 13, she became the youngest gymnast to win the senior all-around title at the U.S. National Championships. She was the youngest member of both the 1995 World Championships team and the gold-medal-winning 1996 Olympics team, and was the last gymnast to compete legally in the Olympics at the age of 14.

Moceanu's last major success in gymnastics was at the 1998 Goodwill Games, where she became the first American to win the all-around gold medal. Family problems, coaching changes, and injuries derailed her efforts to make the 2000 Olympics in Sydney, and she retired from the sport in 2000. Since then, she has worked as a coach, studied business management, and written a memoir, Off Balance.

Moceanu was born in Hollywood, California, to two Romanian immigrants, Dumitru Moceanu (1954–2008) and Camelia Moceanu (née: Staicu; b. 1961). She has two younger sisters: Jennifer Bricker, born October 1, 1987, and Christina Moceanu Chapman, born August 24, 1989. Her parents, who were both gymnasts in Romania, had early aspirations for her gymnastics career. When she was a toddler, they tested her strength by allowing her to hang from a clothesline.

Moceanu began gymnastics classes in Illinois when she was 3 years old and later trained at LaFleur's in Florida. In 1991, when she was 10, her family moved to Houston, Texas, where she became one of the last gymnasts to be trained by legendary Romanian coaches Marta and Béla Károlyi. She began competing internationally at a young age, earning her first U.S. National Team berth in 1992. That spring, she earned five medals—gold in the team event, uneven bars, vault, and floor exercise; silver in the all-around—at the Junior Pan American Games.

Under the Károlyis' tutelage, Moceanu became the junior national champion in 1994. In 1995, she repeated her success as a senior, becoming the youngest gymnast ever to win the USA Gymnastics National Championships. She was also the youngest member of the American team at the 1995 World Championships in Sabae, Japan, where she was the top American finisher in the all-around competition and the only American to win an individual medal, a silver on the balance beam.

Moceanu's national and international successes, combined with her bubbly attitude, earned her attention and a wide fan base both in and out of the gymnastics community. In the months leading up to the 1996 Olympics, she was one of the most recognizable faces of USA Gymnastics, eclipsing more decorated teammates such as Shannon Miller and Dominique Dawes. Before the Olympics, she was featured in Vanity Fair and wrote an autobiography, Dominique Moceanu: An American Champion, with Steve Woodward. The book reached No. 7 on The New York Times Best Seller list.

Moceanu was expected to be a major medal threat at the Olympics. However, after the 1996 U.S. Nationals, where she placed third in the all-around, she was diagnosed with a stress fracture in her right tibia. Her injury forced her to sit out the Olympic Trials, but she was petitioned onto the team on the strength of her Nationals scores.

At the Olympics, still struggling with her injury and sporting a heavily bandaged leg, Moceanu contributed to the team gold medal with performances good enough to qualify her for the event finals on balance beam and floor exercise. However, she faltered in the last rotation of team optionals, falling on both vaults. Her teammate Kerri Strug vaulted next and clinched the gold for the U.S., but injured her ankle in the process. Moceanu took Strug's place in the all-around finals, but made a mistake on the balance beam and placed ninth. In the beam final, she fell when she missed a foot on a layout and crashed into the balance beam on her head. She finished the exercise and went on to a strong performance in the floor finals later that day, finishing fourth and just missing a medal.

After the 1996 Olympics, Moceanu participated in professional gymnastics exhibitions, including a 34-city tour, before returning to competition. With the retirement of the Károlyis, she began training with other coaches at Moceanu Gymnastics, a gym built and run by her family.

Out of peak form, Moceanu placed ninth at the 1997 U.S. Nationals. She then led a mostly inexperienced U.S. team at the 1997 World Championships in Lausanne, Switzerland, where she qualified for the all-around final but did not medal.

In 1998, however, she returned to top form. Under her new coach, Luminiţa Miscenco, she adjusted to a significant growth spurt and developed a more mature style. She was selected to compete at the 1998 Goodwill Games, where she became the only American to win the all-around title. In doing so, she defeated the reigning world all-around champion, Svetlana Khorkina, and the world silver and bronze medalists, Simona Amânar and Yelena Produnova. She outscored the second-place finisher, Maria Olaru—who would become the 1999 world all-around champion—by 0.687 points.

Two years later, training with Mary Lee Tracy at Cincinnati Gymnastics Academy, Moceanu placed eighth at the 2000 U.S. Nationals. She qualified for the Olympic Trials but was forced to withdraw with a knee injury.

After a five-year hiatus from elite gymnastics, Moceanu announced in 2005 that she was returning. An injury kept her from competing that year, but she continued to train on floor and vault, and in the summer of 2006, she was invited to attend the USA Gymnastics national training camp.

Moceanu competed at the 2006 U.S. Classic, where she successfully performed a full-twisting Tsukahara vault. On floor, however, she went out of bounds on her tucked full-in tumbling pass and fell on her double pike, posting one of the lowest scores of the meet. In a decision that proved controversial, she did not qualify to the 2006 National Championships. She stated that USA Gymnastics officials had told her she would qualify if she attended the national training camp and competed at least one event at the U.S. Classic. But after the Classic, she was told that she had needed a combined score on two events of 28.0 or higher to qualify; her combined score on vault and floor was 27.1. She appealed the decision, but it was upheld.

She now coaches part-time at Gymnastics World in Broadview Heights, Ohio, and conducts clinics and private lessons around the country.

Moceanu was raised Romanian Orthodox, and has said her faith was a source of comfort in her career as a gymnast.

In late 1998, when she was 17, Moceanu left home and sued for emancipation from her parents in order to regain control of the money she earned as a professional gymnast. In the resulting court case and television interviews, she stated that her father squandered her sizable earnings and had an abusive, controlling nature. The court approved her petition for emancipation and control of her finances. She eventually reconciled with both of her parents.

On November 4, 2006, Moceanu married Dr. Michael Canales, a podiatrist and former Ohio State gymnast. On December 25, 2007, she gave birth to a daughter, Carmen Noel Canales. Her second child, a son named Vincent Michael Canales, was born on March 13, 2009. In May 2009, Moceanu graduated from John Carroll University with a business management degree.

In her memoir Off Balance, Moceanu revealed that she has a younger sister, Jennifer Bricker, who was born without legs and was given up for adoption at the hospital at birth. Bricker is an acrobat and aerialist who idolized Moceanu before finding out they were sisters.

In Off Balance, Moceanu also alleged that Béla and Marta Károlyi were abusive and manipulative when she trained under them.

The contents of this page are sourced from Wikipedia article on 26 Mar 2020. The contents are available under the CC BY-SA 4.0 license.
View Dominique Moceanu 's image gallery
Image Gallery