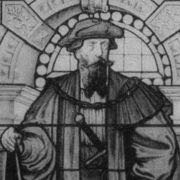 In 1525 Koel was commander of one of four ships of the fleet of Admiral Simon Parseval. 7 October he came into sea battle with the fleet of the pirate Claus Kniphoff. After 8 hours he managed to take the ship Gallion.

He brought the pirates and the loot to Hamburg, and was 1527 elected to Ratsherr (councilman).

Koel promoted the Reformation and initiated the reformation of the Hansatown.

In 1536, as Admiral for a defence fleet, he stopped a raid from Count Palatine Friedrich von Hadeln.

In 1548 Koel was elected mayor of Hamburg.

In 1559 he was in command of the defence of Hamburg-Moorburg against an attack from duke Otto I, Duke of Brunswick-Harburg.

In 1562 he traveled with two colleagues in a diplomatic journey to Copenhagen, in order to settle a conflict with the Danish king.

Successfully, he returned to Hamburg, where he died on 22 September 1563.

The contents of this page are sourced from Wikipedia article on 10 Mar 2020. The contents are available under the CC BY-SA 4.0 license.
View Ditmar Koel 's image gallery
Image Gallery