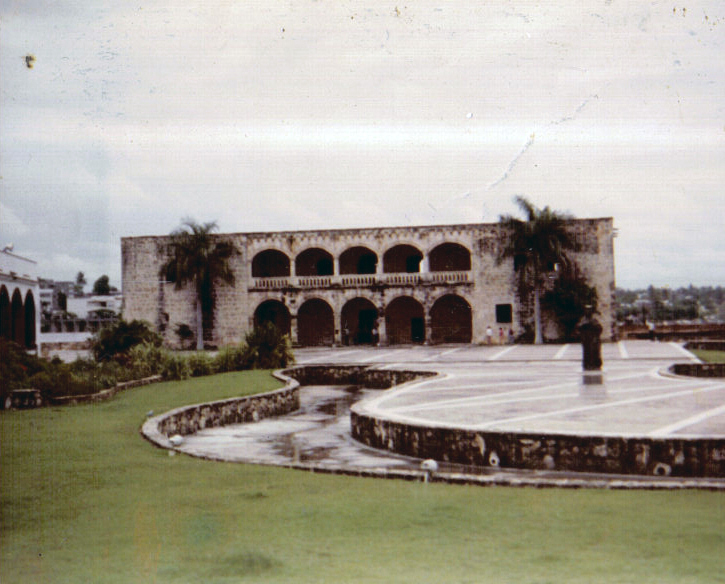 Diego Columbus (Portuguese: Diogo Colombo; Spanish: Diego Colón; also, in Italian: Diego Colombo) (1479/80-1526) was a Portuguese navigator and explorer under the Kings of Castile and Aragón. He served as the 2nd Admiral of the Indies, 2nd Viceroy of the Indies and 4th Governor of the Indies as a vassal to the Kings of Castile and Aragón. He was the eldest son of Christopher Columbus and wife Filipa Moniz Perestrelo.
He was born in Portugal, either in Porto Santo in 1479/1480, or in Lisbon in 1474. He spent most of his adult life trying to regain the titles and privileges granted to his father for his explorations and then denied him in 1500. He was greatly aided in this goal by his marriage to María de Toledo y Rojas, niece of the 2nd Duke of Alba, who was the cousin of King Ferdinand.

Diego was made a page at the Spanish court in 1492, the year his father embarked on his first voyage. Diego had a younger half-brother, Fernando, by Beatriz Enriquez de Arana.

Ferdinand and Diego had been pages to Prince Don Juan, then became pages to Queen Isabella in 1497.

In 1509, he was named Governor of the Indies, the post his father had held. He established his home (El Alcázar de Colón), which still stands, in Santo Domingo in what is now the Dominican Republic.

According to Floyd, Diego "...was accompanied by a splendid entourage: his wife, Dona Maria, the first gran dama of the New World, the Duke of Alba's niece, with her own suite of doncellas; and his immediate relatives - Fernando his half-brother, his two uncles, Diego and Bartolome, and his cousins, Andrea and Giovanni. Also on the expedition were his criados and his father's old retainers: Marcos de Aguilar, his forthright alcalde mayor, Diego Mendez, his business manager, and Geronimo de Aguero, his former tutor. Other loyal Colombistas met him at Santo Domingo - his uncle by marriage, Francisco de Garay, whom he named alguacil mayor, and Bartolome's criados, Miguel Diaz, Diego Velazquez, and Juan Cerón. His coming represented the permanent establishment of the most titled and notable family in the islands, at least for many years.":137

In 1511, a royal council declared Hispaniola, Puerto Rico, Jamaica and Cuba were under Diego's power "by right of his father's discovery." However, Uraba and Veragua were deemed excluded, since the council regarded them as being discovered by Rodrigo de Bastidas. The council further confirmed Diego's titles of Viceroy and admiral were hereditary, though honorific. Furthermore, Diego had the right to one-tenth of the net royal income. However, factions soon formed between those loyal to Diego and Ferdinand's royal officials. Matters deteriorated to the point that Ferdinand recalled Diego in 1514. Diego then spent the next five years in Spain "futilely pressing his claims." Finally, in 1520, Diego's powers were restored by Charles.:143-144,148,197

Diego returned to Santo Domingo on 12 Nov. 1520 in the midst of a native revolt in the area of the Franciscan missions on the Cumana River. This was also the area of the Spanish salt and pearl trade, besides slave hunting. Diego sent Gonzalo de Ocampo on a punitive expedition with 200 men and 6 ships. Then in 1521, Diego invested in Bartolome de las Casas' enterprise to settle the Cumana area. That failure, blamed on Diego, meant the loss of the king's confidence. That loss, plus Diego's defiance of royal power on Cuba, forced Charles to reprimand Diego in 1523 and recall him back to Spain.:204-210,213,215

After his death, a compromise was reached in 1536 in which his son Luis Colón de Toledo was named Admiral of the Indies and renounced all other rights for a perpetual annuity of 10,000 ducats, the island of Jamaica as a fief, an estate of 25 square leagues on the Isthmus of Panama, then called Veragua, and the titles of Duke of Veragua and Marquess of Jamaica.

The first major slave revolt in the Americas occurred in Santo Domingo during 1522, when enslaved Muslims of the Wolof nation led an uprising in the sugar plantation of admiral Don Diego Colon. Many of these insurgents managed to escape to the mountains where they formed independent maroon communities among the Tainos.

After Columbus' death on February 23, 1526 in Spain, the rents, offices and titles in the New World went into dispute by his descendants.

Initially planned to marry Mencia de Guzman, daughter of the Duke of Medina Sidonia but was forced by King Fernando to marry the king's cousin María de Toledo y Rojas (c. 1490 – May 11, 1549), who secured the transportation and burial of her father–in–law, Christopher Columbus, in Santo Domingo. She was the daughter of Fernando Alvarez de Toledo, 1st Lord of Villoria, son of García Álvarez de Toledo, 1st Duke of Alba, and his first wife María de Rojas, and had: