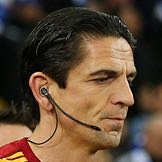 Deniz Aytekin (born 21 July 1978) is a German football referee of Turkish descent who is based in Oberasbach. He referees for TSV Altenberg of the Bavarian Football Association. He is a FIFA referee, and is ranked as a UEFA elite category referee.

Aytekin refereed his first Bundesliga match on 27 September 2008 when Hertha BSC played FC Energie Cottbus in Berlin. Energie Cottbus won the game 1–0, and Aytekin gave out four yellow cards, including one to Cottbus goalkeeper Gerhard Tremmel for time-wasting in the 90th minute. In 2017, in the UEFA Champions League Round of 16 second leg played between FC Barcelona and Paris Saint Germain, Aytekin made a number of controversial decisions, which ultimately led to Barcelona completing a comeback after being beaten 0-4 in the first leg.

Aytekin lives in Oberasbach, Bavaria and is an internet entrepreneur.

The contents of this page are sourced from Wikipedia article on 11 Mar 2020. The contents are available under the CC BY-SA 4.0 license.
View Deniz Aytekin 's image gallery
Image Gallery