Denis Gorbunenko was born in Donetsk in a family of Vladimir Gorbunenko, a State Bank member. In 1996 Gorbunenko graduated from the Donetsk State Academy of Management. In 1998 he held his MBA from the Oxford Brookes University, upheld a thesis "Direct foreign investment as a mode to enter Ukraine".

In 1991 Denis Gorbunenko starts his career as Courier at Alice (IMPO LLC), a company specializes on construction materials. In 1992 he became a deputy CEO at IMPO LLC. Later, on February 1992, Gorbunenko moved to the Donbas branch of Inco JSC to the position of a credit department’s leading specialist. In 1995 he was appointed as a Deputy Director of Donetsk branch of the bank. In early 1998, Denis moved to Kyiv, where he held a position of Head of liabilities products at Kyiv-Private Bank. Later he took an offer to become the Head of international settlements and operations division at the Kiev International Bank, founded in 1996 by the Dutch Rabobank and the European Bank for Reconstruction and Development.

Since 2005, Denis Gorbunenko was one of the most active sponsors Ukrainian Olympic and Paralympic teams. 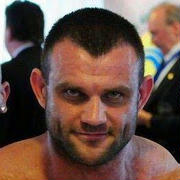