Deborah Compagnoni was born in Bormio, northern Lombardy, and skied with the G.S. Forestale club.

Compagnoni soon attracted attention for her great talent. Her career was always marked by major successes, but also by serious accidents. After her first major victory, the World Junior title in Giant slalom, and her first podium in World Cup, she broke her right knee in the Val d'Isére downhill. After surgery she decided to stop competing in downhill races, where her talent could have permitted even greater successes than those she obtained in her still outstanding career.

Compagnoni won her first race in the World Cup in 1992. She also won the gold medal at the Winter Olympics of the same year, again in the Super-G: however, while racing the Giant Slalom, one day later, she destroyed her left knee.

In the following years she left the speed disciplines (downhill and super-G), confirming herself as one of the best Giant Slalom specialists. Her fragile knees hindered Compagnoni's practice activity and limited the number of victories in the World Cup: however, she always arrived in her best shape for the major championships. In 1994, at the Lillehammer Olympics, she won the gold medal in the Giant Slalom, a feat she repeated four years later in Nagano. In 1998 she won also a silver medal in the Slalom, finishing second by only 0.06 seconds.

Compagnoni won the World Championship in Giant Slalom in 1996: in the following year's edition she repeated the victory, alongside winning with the Slalom title, a feat never accomplished by any Italian female skier. She won a total of 16 races in the Alpine Skiing World Cup (13 Giant Slalom, 2 Super-G and 1 Slalom), plus a Giant Slalom World Cup in 1997.

Deborah Compagnoni is considered the best Italian female skier of all time, the equal of famous male champions like Gustav Thöni and Alberto Tomba. The World Cup skiing track in her native Santa Caterina Valfurva has been named after her.

She is married to Alessandro Benetton; they have three children: Agnese, Tobias, and Luce; they live in Ponzano Veneto, Italy.

These are her world cup victories.

The contents of this page are sourced from Wikipedia article on 06 Oct 2019. The contents are available under the CC BY-SA 4.0 license.
View Deborah Compagnoni 's image gallery
Image Gallery 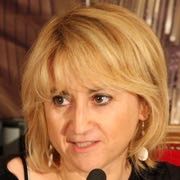