David Lazarus is an American business and consumer columnist for the Los Angeles Times. He joined the paper in August 2007.

He attended Ojai Valley School and Crossroads School (Santa Monica, California) before heading north to attend and graduate from the University of California, Berkeley, where he earned a degree in history.

Before joining the LA Times staff in 2007, Lazarus worked as a columnist for the San Francisco Chronicle and a nightly talk radio host for San Francisco's KGO Radio.

He won first place in the 2005 National Headliner Awards contest for business reporting. And the Society of Professional Journalists in Northern California named him "Journalist of the Year" in 2001. A media watchdog site, Grade the News, described him this way: "Since coming to the Chronicle from Wired News in 1999, David Lazarus has been one of the most prolific, and influential, writers at the paper." He is known for sticking up and helping ordinary people deal with problems "such as fighting telemarketers" when no one else is able to step up.

Lazarus is the author of two books on Japan, where he lived for several years, and has had articles published in many magazines.

David lives in Southern California with his wife and son. 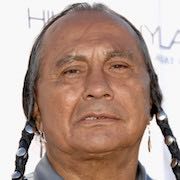 Oglala Lakota activist for the rights of Native American people