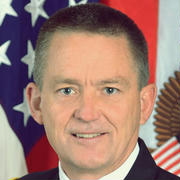 Daniel B. Allyn
The basics

Allyn was born in New Hampshire on September 24, 1959, and raised in Berwick, Maine. He graduated from the United States Military Academy at West Point, New York in 1981.

Allyn went on to serve overseas in South Korea, Grenada, Egypt, Panama, Saudi Arabia, Kuwait, Iraq and Afghanistan as a combat infantryman and a master parachutist.

In 2013, Allyn was the honoree of the Patriot Foundation, an organization that provides scholarships and other support to the families of soldiers who have served in airborne, special operations and other army specialty units.

The contents of this page are sourced from Wikipedia article on 30 Jun 2020. The contents are available under the CC BY-SA 4.0 license.
View Daniel B. Allyn 's image gallery
Image Gallery