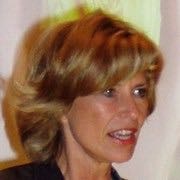 Dagmar Gabriele Wöhrl, born as Winkler (born May 5, 1954 in Stein, Bavaria) is a German politician with the CSU.

In the negotiations to form a coalition government following the 2009 federal elections, Wöhrl was part of the CDU/CSU delegation in the working group on economic affairs and energy policy, led by Guttenberg and Rainer Brüderle. She later served as Chairwoman of the Committee for Economic Cooperation and Development of the German Bundestag. She was also a member of the Parliamentary Friendship Group for Relations with Arabic-Speaking States in the Middle East, which is in charge of maintaining inter-parliamentary relations with Bahrain, Irak, Yemen, Jordan, Qatar, Kuwait, Lebanon, Oman, Saudi Arabia, Syria, United Arab Emirates, Palestinian territories.

From 2009, Wöhrl also served on the Committee on Cultural and Media Affairs, where she was her parliamentary group's rapporteur on creative industries.

In March 2015, Wöhrl accompanied German President Joachim Gauck on a state visit to Peru. In addition, she joined the delegations of Federal Minister of Economic Cooperation and Development Gerd Müller to Nigeria (2014), Ghana (2015), Liberia (2015) and the Central African Republic (2015).

In April 2016, Wöhrl announced that she would not stand in the 2017 federal elections but instead resign from active politics by the end of the parliamentary term. By early 2017, media reported that she would be joining the jury of Die Höhle der Löwen, a VOX reality television format featuring entrepreneurs pitching their business ideas in order to secure investment finance from a panel of venture capitalists.

When several Western countries froze their official development assistance for Uganda in response to the country's Anti-Homosexuality Act in 2014, Wöhrl warned that "stopping all the aid would only hit the poorest of poor once again."

Peace-keeping on the African continent

On February 27, 2015, Wöhrl voted against the Merkel government’s proposal for a four-month extension of Greece's bailout; in doing so, she joined a record number of 29 dissenters from the CDU/CSU parliamentary group who expressed skepticism about whether the Greek government under Prime Minister Alexis Tsipras could be trusted to deliver on its reform pledges. On July 17, she voted against the government’s proposal to negotiate a third bailout for Greece.

Wöhrl is the wife of the German CEO Hans Rudolf Wöhrl. In 2001 she was subject of much media coverage after her younger son Emanuel died because of an accident. Her older son Marcus ran for the European Parliament in 2004.

The contents of this page are sourced from Wikipedia article on 10 Mar 2020. The contents are available under the CC BY-SA 4.0 license.
View Dagmar Wöhrl 's image gallery
Image Gallery