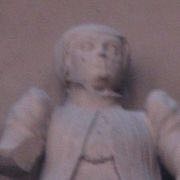 Countess Palatine Helena of Simmern (13 June 1532 – 5 February 1579 at Schwarzenfels Castle in Sinntal ) was the daughter of Count Palatine and Duke John II of Simmern and his wife, Margravine Beatrice of Baden. She was Countess of Hanau-Münzenberg by marriage.

On 22 November 1551, Helena married Count Philip III of Hanau-Münzenberg (1526–1561). Their combined coat of arms can be seen at the main entrance of the Church of St. Mary in Hanau. However, due to environmental factors, the stone has weathered and is in poor condition.

Philip and Helena had five children:

After the early death of her husband, she initiated the proceedings before the Supreme Court to establish the guardianship of her son Philip Louis I, who was still a minor. She was not appointed as guardian herself.

Initially, she used Steinau Castle as her widow seat; later she moved to Schwarzenfels Castle, where she died. After her death, her body was transferred to Hanau in a lead coffin, and buried in the Church of St. Mary, next to her husband.

The contents of this page are sourced from Wikipedia article on 11 Mar 2020. The contents are available under the CC BY-SA 4.0 license.
View Countess Palatine Helena of Simmern 's image gallery
Image Gallery