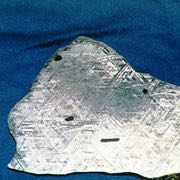 During his youth, he was trained in the printing art by his father. His family owned exclusive printing rights in the Steiermark province, but this was lost in 1784 and Alois sold the business in 1807. In 1804, he ran a spinning mill in Pottendorf, Austria.

Starting in 1807, he was placed in charge of the Fabriksproduktenkabinett, a private collection of technology owned by the Emperor. In 1808, he was the director of the Imperial Porcelain works in Vienna.

In 1808, he independently discovered some metallographic patterns in iron meteorites, that came to be called Widmanstätten patterns, by flame-heating a slab of Hraschina meteorite. The different iron alloys of meteorites oxidized at different rates during heating, causing color and luster differences.

Widmanstätten did not publish his discovery, but did communicate it orally with colleagues. Nevertheless, the pattern came to be known by his name, particularly after Carl von Schreibers, director of the Vienna Mineral and Zoology Cabinet, named the structure after Widmanstätten in his 1820 catalogue.

The Widmanstätten pattern had been observed previously, in 1804, by the English mineralogist William (Guglielmo) Thomson. During the period that he spent in Naples, he discovered these figures by bathing a Krasnojarsk meteorite in nitric acid for the purpose of removing rust. In 1804, Thomson published his discovery in French in the Bibliothèque Britannique, but Thomson had chronological priority for the discovery.