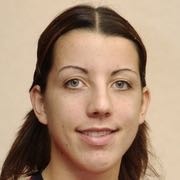 Cornelia Dumler (born January 22, 1982 in Feuchtwangen), nicknamed "Conny", is a volleyball player from Germany; she played as an outside-hitter for the German Women's National Team since 2002.

She represented her native country in at the 2004 Summer Olympics, finishing in ninth place, and at the 2003 Women's European Volleyball Championship, finishing third.

The contents of this page are sourced from Wikipedia article on 10 Mar 2020. The contents are available under the CC BY-SA 4.0 license.
comments so far.
Comments
Reference sources
References
https://web.archive.org/web/20110719113851/http://www.volleyball-verband.de/index.php?dvv=webpart.pages.DVVDynamicPage&navid=5277&coid=5277&cid=1&dvvsid=4b4fb3b9be33c7bc6906263c03a2f3a9
Trending today in