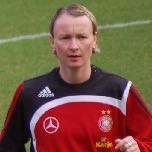 Conny Pohlers (born 16 November 1978, Halle) is a retired German football player. Since 1998 she has played in the Women's Bundesliga and since 2001 in the Germany women's national football team.

Pohlers comes from a football playing family. Her father played and her mother was once the top goal scorer in a regional league. She first played at the age of seven with FSV '67 Halle. In 1994, she moved to 1. FFC Turbine Potsdam. In the 2003 season, she played in the American professional league, WUSA, with the Atlanta Beat. In February 2007 she announced that she would be transferring to 1.FFC Frankfurt for the 2007–08 season. In 2013, playing for VfL Wolfsburg, she again became a Bundesliga champion, and on 19 May she scored a goal in Wolfsburg's 3–2 Cup Final win against her old team, Turbine Potsdam.

The contents of this page are sourced from Wikipedia article on 08 Mar 2020. The contents are available under the CC BY-SA 4.0 license.
View Conny Pohlers 's image gallery
Image Gallery