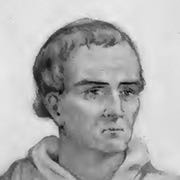 Pope Clement II (Latin: Clemens II; born Suidger von Morsleben; died 9 October 1047), was Pope from 25 December 1046 until his death in 1047. He was the first in a series of reform-minded popes from Germany.

Suidger was the Bishop of Bamberg. In 1046, he accompanied Henry, King of Germany, when at the request of laity and clergy of Rome, Henry went to Italy and summoned the Council of Sutri, which deposed Popes Benedict IX and Sylvester III, and accepted the resignation of Gregory VI. Henry suggested Suidger for Pope, and he was then elected, taking the name of Clement II. Clement then proceeded with the coronation of Henry as Holy Roman Emperor.

Born in Hornburg, Lower Saxony, Germany, he was the son of Count Konrad of Morsleben and Hornburg and his wife Amulrad. In 1040, he became Bishop of Bamberg.

In the autumn of 1046, there were three rival claimants to the papacy, in St. Peter's, the Lateran, and St. Mary Major's. Two of them, Benedict IX and Sylvester III, represented rival factions of the nobility. The third, Pope Gregory VI, in order to free the city from the House of Tusculum, and Benedict's scandalous lifestyle, had paid Benedict money in exchange for his resignation. Regardless the motives, the transaction bore the appearance of simony. Questions regarding the legitimacy of any of them could undermine the validity of a coronation of Henry as Holy Roman Emperor. King Henry crossed the Alps at the head of a large army and accompanied by a brilliant retinue of the secular and ecclesiastical princes of the empire, for the twofold purpose of receiving the imperial crown and of restoring order.

In 1046, Suidiger accompanied King Henry on his campaign to Italy and in December, participated in the Council of Sutri, which deposed former Popes Benedict IX and Sylvester III and persuaded Pope Gregory VI to resign. King Henry nominated Suidger for the papacy and the council elected him. Suidger insisted upon retaining the bishopric of his see, partly for needed financial support, and partly lest the turbulent Romans should before long send him back to Bamberg. Suidger took the name Clement II. Immediately after his election, King Henry and the new Pope travelled to Rome, where Clement was enthroned as pope. and then crowned Henry III as Holy Roman Emperor.

Clement's election was later criticized by the reform party within the papal curia due to the royal involvement and the fact that the new Pope was already bishop of another diocese. Contrary to later practice, Clement kept his old see, governing both Rome and Bamberg simultaneously.

Clement's first pontifical act was to crown Henry and the queen-consort, Agnes of Aquitaine. He bestowed on the Emperor the title and diadem of a Roman Patricius, a dignity which was commonly understood to give the bearer the right of indicating the person to be chosen pope.

Clement II's short pontificate, starting with the Roman synod of 1047, initiated an improvement in the state of affairs within the Roman Church, particularly by enacting decrees against simony. A dispute for precedence among the Sees of Ravenna, Milan, and Aquileia was settled in favour of Ravenna.

Clement accompanied the Emperor in a triumphal progress through southern Italy and placed Benevento under an interdict for refusing to open its gates to them. Proceeding with Henry to Germany, he canonized Wiborada, a nun of St. Gall, martyred by the Hungarians in 925. On his way back to Rome, he died near Pesaro on 9 October 1047. His corpse was transferred back to Bamberg, which he had loved dearly, and interred in the western choir of the Bamberg Cathedral. His is the only tomb of a Pope north of the Alps.

A toxicologic examination of his remains in the mid-20th century confirmed centuries-old rumors that the Pope had been poisoned with lead sugar. It is not clear, however, whether he was murdered or whether the lead sugar was used as medicine.

The contents of this page are sourced from Wikipedia article on 08 Mar 2020. The contents are available under the CC BY-SA 4.0 license.
View Clement II 's image gallery
Image Gallery