Nakahara Chūya was born in what is now part of the city of Yamaguchi in Yamaguchi Prefecture in 1907, where his father, Nakahara Kansuke, was a highly decorated army doctor. In his early life, his father was posted to Hiroshima and Kanazawa, returning to Yamaguchi in 1914. In 1915, his younger brother died, and in sorrow he turned to composing poetry. He submitted his first three verses to a women’s magazine and local newspaper in 1920, when he was still in elementary school. In 1923, he moved to the Ritsumeikan Middle School in Kyoto, and from April 1924, began living together with the actress Yasuko Hasegawa.

Initially, Chūya favored poetry in the Japanese traditional tanka format, but he was later (in his teens) attracted to the modern free verse styles advocated by Dadaist poet Takahashi Shinkichi and by Tominaga Tarō.

After he moved to Tokyo, he met Kawakami Tetsutaro and Ooka Shohei, with whom he began publishing a poetry journal, Hakuchigun (Idiots). He was befriended by the influential literary critic Kobayashi Hideo, who introduced him to the French symbolist poets Arthur Rimbaud and Paul Verlaine, whose poems he translated into Japanese. The influence of Rimbaud went beyond just his poetry, and Nakahara came to be known for his "bohemian" lifestyle.

Chūya adapted the traditional counts of five and seven used in Japanese haiku and tanka, but frequently tripped these counts with variations, in order to obtain a rhythmical, musical effect. Several of his poems were used as lyrics in songs, so this musical effect may have been carefully calculated from the start.

Chūya's works were rejected by many publishers, and he found acceptance primarily with the smaller literary magazines, including Yamamayu, which he launched together with Kobayashi Hideo, (although on occasion Shiki and Bungakukai would condescend to publish one of his works). He remained close friends with Kobayashi all of his life, despite the fact that in November 1925, Yasuko Hasegawa left Chūya and began living with Kobayashi Hideo instead.

In December 1927, he met composer Saburō Moroi, who later adapted a number of his verses to music.

In April 1931, Chūya was admitted to the Tokyo Foreign Language College in Kanda to study the French language, where he remained until March 1933. Chūya married in December 1933, and his first son, Fumiya, was born in October 1934. However, the death of his son in November 1936 sent him into a nervous breakdown from which he never fully recovered. Many of his later poems seem like remembrances and attempts to mitigate this enormous pain.

Chūya was hospitalized in Chiba in January 1937. In February, he was released and moved back to Kamakura. He left a number of his works with Kobayashi Hideo, and was making plans to return to his home town of Yamaguchi when he died in October 1937 at the age of 30 of cerebral meningitis. His grave is at his hometown of Yamaguchi.

Only one of his poetry anthologies, Yagi no Uta ("Goat Songs", 1934) appeared while he was alive (in a self-financed edition of two hundred copies). He had edited a second collection, Arishi Hi no Uta ("Songs of Bygone Days") just before his death. During his lifetime, Chūya was not counted among the mainstream of poets, but his verses have a wide and increasing following even to this day. Chūya is now a subject of classroom study in Japanese schools, and his portrait in a hat with a vacant stare is well known. Kobayashi Hideo, to whom Chūya entrusted the manuscript for Arishi Hi no Uta on his deathbed was responsible for the posthumous promotion of his works, and Ooka Shohei for collecting and editing The Complete Works of Nakahara Chūya, a collection containing the poet's uncollected poems, his journals, and many letters. 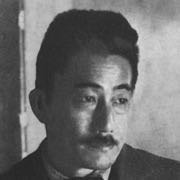