Joy Ladin (born March 24, 1961) is an American poet and the David and Ruth Gottesman Chair in English at Stern College for Women at Yeshiva University. She is the first openly transgender professor at an Orthodox Jewish institution.

Ladin has described intuiting her girlhood at a young age, viewing her assigned male identity as "false" as a child. At age eight, she began calling herself a "pacifist" in order to avoid combative play and athletics.

As of 2018, Ladin has published nine books of poetry. (Some of these works appear under her previous name.)

In 2013, Ladin published a series of poems formed entirely from words and phrases found in popular women's magazines. These poems, such as "Ready To Know," link both trans women and cis women's experiences of gender to the "commodity capitalist engine of the production of femininity." This work emerged when Ladin gave herself a "writing assignment" to creatively engage with the "how-to" rhetoric of mainstream femininity. In 2016, Ladin won a $25,000 creative writing grant from the National Endowment for the Arts.

In 2012, she published the memoir Through the Door of Life: A Jewish Journey Between Genders.[13] In the book, she asserts that she is "old-fashioned – a garden-variety transsexual, rather than a post-modernist shape-shifter,” a claim which led critics to contrast her memoir with Kate Bornstein's. Her memoir describes her family life, her transition, and her religious faith, including her perception that her "gender identity crisis had destroyed [her] marriage." In 2012, Through the Door of Life was a finalist in the "Biography, Autobiography, Memoir" category of the National Jewish Book Awards.

Alongside her creative output, Ladin has frequently commented on the fields of trans literature and poetics. Ladin takes a non-identitarian stance, in that she does not believe that trans literature is necessarily being about trans experiences, or written by trans people.

In her "Trans Poetics Manifesto," Ladin defines trans poetics as "techniques that enable poetic language to reflect the kind of complex, unstable, contradictory relations between body and soul, social self and psyche, that those who see ourselves as transgender experience as acute, definitive, life-changing." Ladin has argued that poetry, and lyric forms in particular, might be the best mode through which to represent the transgender experience.

In 2018, Ladin published her first full-length academic monograph, The Soul of the Stranger: Reading God and Torah from a Transgender Perspective (Brandeis University Press). Her book offers trans readings of the Torah in order to argue that, despite traditional readings of Genesis and other biblical stories as enforcing a strict dichotomy between men and women, “God is not particularly invested in gender” or the gender binary per se. Ladin's exegesis instead positions Jewish religious patriarchy as a function of social norms, not the sacred texts themselves. In a divergence from traditional scholarly reading methods, The Soul of Stranger includes autobiographical reflection as well as close readings.

Ladin has three children from her previous marriage to the writer Christine Benvenuto. She is now remarried. 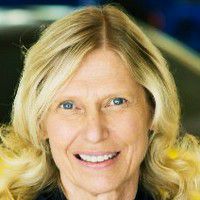