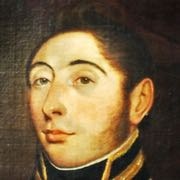 In 1771, aged six, he was sent to be educated by his uncle Dietrich Heinrich Ludwig von Ompteda (1746–1803) and in 1777 he joined the Royal Corps of Pages at Hannover. In 1781 he became a lieutenant in the foot-guards. In 1793 he rose to command a grenadier company in the French Revolutionary Wars, being badly wounded at Mont Cassel, and then in 1794 he went to England with Field Marshal Wilhelm von Freytag.

In 1803 he was a major in the Hanoverian guards-regiment and, when the Convention of Artlenburg dissolved the Hanoverian army on 5 July that year, he was one of the first to join what became the King's German Legion. In 1805 he led an unsuccessful expedition to northern Germany during the War of the Third Coalition and a year later he and his battalion moved to Gibraltar. In 1807 they moved again, to Zeeland, where they fought against Denmark in the Gunboat War (also known as the English Wars). On the return journey his ship sank off the coast of the Netherlands and he was held prisoner in Borkum until being freed in a prisoner exchange in 1808.

In 1812 he was made Oberstleutnant and in 1813 he was put in command of the Legion’s 1st Light Battalion. In 1815 he was an oberst and a brigade commander in general Charles Alten’s division within Wellington’s army. Ompteda was killed at Waterloo after being ordered by the Prince of Orange into a counter-attack in column with the 5th Line Battalion to retake La Haye Sainte, he had been shot at point blank range.

The contents of this page are sourced from Wikipedia article on 10 Mar 2020. The contents are available under the CC BY-SA 4.0 license.
View Christian Friedrich Wilhelm von Ompteda 's image gallery
Image Gallery