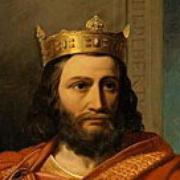 In the partition of the realm, he received as his share the town of Paris, the country to the north as far as the river Somme, to the west as far as the English Channel, and the Armorican peninsula (modern Brittany). His brothers ruled in different lands: Theuderic I in Metz, Chlodomer in Orléans, and Clothar I in Soissons.

In 523, Childebert participated with his brothers in a war against Godomar of Burgundy. Chlodomer died in the Battle of Vézeronce (524). Thereafter, concerned that the three sons of Chlodomer would inherit the kingdom of Orléans, Clothar conspired with Childebert to oust them. They sent a representative to their mother Clotilde, who as the queen mother had authority as the head of the family line. The representative presented a pair of scissors and a sword, offering her the choice to shear the three young boys, thereby depriving them of the long hair considered a symbol of royal power, or to have them killed. She famously replied, "It is better for me to see them dead rather than shorn, if they are not raised to the kingship". After the murder of Chlodomer's two elder children—the third, Clodoald, escaping to a monastic life—Childebert annexed the cities of Chartres and Orléans.

He took part in later various expeditions against the kingdom of Burgundy. He besieged Autun in 532 and, in 534, having conquered the kingdom along with his brother Clothar and Theuderic's son Theudebert I, received as his share of the spoils of that kingdom the towns of Mâcon, Geneva, and Lyons. When Witiges, the king of the Ostrogoths, ceded Provence to the Franks in 535, the possession of Arles and Marseilles was guaranteed to Childebert by his brothers. The annexation of that province was completed, with Clotaire's help, in the winter of 536–537.

In 531, he received pleas from his sister Chrotilda, wife of King Amalaric of the Visigoths. The Arian king of Hispania, Chrotilda claimed, was grossly mistreating her, a Catholic. Childebert went down with an army and defeated the Gothic king. Amalaric retreated to Barcelona, where he was assassinated. Chrotilda died on her return journey to Paris of unknown causes.

Childebert made other expeditions against the Visigoths. In 542, he took possession of Pamplona with the help of his brother Clotaire and besieged Zaragoza, but was forced to retreat. From this expedition he brought back to Paris a precious relic, the tunic of Saint Vincent, in honour of which he built at the gates of Paris the famous monastery of Sainte-Croix-et-Saint-Vincent, known later as St-Germain-des-Prés.

He died on 13 December 558, and was buried in the abbey he had founded, where his tomb has been discovered. St-Germain-des-Prés became the royal necropolis for the Neustrian kings until 675. He left no sons, only two daughters, Chrodoberge and Chrodesinde, by his wife Ultragotha. Childebert was an acquisitive monarch. He expanded his domains in more foreign wars than any of his brothers, fighting in Burgundy (more than once), Spain (more than once), Provence, and elsewhere in Gaul. Gregory of Tours, a contemporary Neustrian, cites Childebert as saying: "Velim unquam Arvernam Lemanem quae tantae jocunditatis gratia refulgere dicitur, oculis cernere" ("Would that I could set eyes on the Auvergne Limagne, which is spoken of so highly"). Childbert was also one of the more religious of the sons of Clovis, cooperating with his brothers, rescuing his sister, and constructing the famous monastery of Saint Vincent to house his relics. 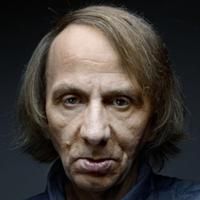