Charlotte von Kirschbaum (June 25, 1899 – July 24, 1975) was a German theologian, and assisted Karl Barth in writing the Church Dogmatics. Charlotte von Kirschbaum was born in Ingolstadt. In 1916 her father died in the war, which inspired her to be trained as a nurse. In 1924 she met Karl Barth, and initially became his pupil and later contributed to all of Karl Barth's academic publications.

Charlotte von Kirschbaum and Barth met at the University of Göttingen in 1924, when she was 25 years old, at the time she was a Red Cross nurse and had an interest in theology and economically destitute.

"I should not like to conclude this Preface without expressly drawing the attention of readers of these seven volumes to what they and I owe to the twenty years of work quietly accomplished at my side by Charlotte von Kirschbaum. She has devoted no less of her life and powers to the growth of this work than I have myself. Without her co-operation it could not have been advanced from day to day, and I should hardly dare contemplate the future which may yet remain to me. I know what it really means to have a helper."

For the sake of the work she learned Latin, Greek and Hebrew. She also attended the philosophical lectures of Heinrich Scholz. She made an important contribution to the production of Barth's Church Dogmatics. In 1935 Barth moved to Basel, Switzerland, followed by Charlotte. From there they supported the German Resistance.

In 1949 her theological book Die wirkliche Frau (The Real Woman) was published. It discussed the role of women.

End of life and burial

The contents of this page are sourced from Wikipedia article on 10 Mar 2020. The contents are available under the CC BY-SA 4.0 license.
View Charlotte von Kirschbaum 's image gallery
Image Gallery 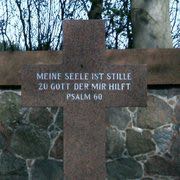