Charles Gray is an American musician, best known for his tenure as the guitarist for the Orange County rock band The Aquabats, of which he served as a member from 1994 to 2000 under the stage name of Ultra Kyu and later The Mysterious Kyu (pronounced as the letter Q). He also wrote all the songs for The Goodwin Club, a Ska band from Orange County, from 1993 to 1995. 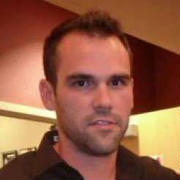