Carolina Gynning Nilsson (born 6 October 1978) is a Swedish glamour model, actress, author, jewelry designer and television presenter. She started her career as a model at age sixteen. She entered the Big Brother house in 2004 and emerged as the winner of that season. Gynning has since made a career as a television presenter on TV4 and Kanal5, and also as an artist and author of several books. Gynning has participated in several television shows after Big Brother such as I huvudet på Gynning, and as a celebrity dancer in season one of Let's Dance.

Gynning was born in Helsingborg, Sweden and lived in Höganäs for a short time, but spent most of her early years in Falsterbo. She revealed that she was a shy girl but changed when she reached her teens. She attended high school in Lund. At sixteen she was discovered by a fashion photographer while waiting at a bus stop in Falsterbo, and during her high school years she did some modelling assignments on the side. After a while, she landed modeling jobs in international shows in Athens, Milan and Paris. She lived and worked abroad for ten years mostly as a glamour model. During this time she also underwent breast implant surgery to enlarge her breasts.

Carina Berg and Gynning in 2009

After a few years working as a glamour model, Gynning was approached by producers of the Swedish version of the reality show Big Brother and entered the house in January 2004, becoming the season's eventual winner. In 2006, she entered Let's Dance as a celebrity dancer. She appeared on Season 1 of the show which was broadcast on TV4. Her dance partner was Daniel da Silva and she was eliminated in the second round. During late 2006 she worked for Viasats Formula 1 show Studio F1 along with Tore Kullgren and simultaneously was one of five hostesses for the TV4 show Förkväll. During 2007, Gynning hosted the audition part of Idol 2007 along with Carina Berg. During 2008, Gynning hosted her own show, I huvudet på Gynning (Inside Gynning's Head), which was broadcast on Kanal5; she also hosted the talent show Hitmakers that year on the same channel. During late 2008 she and Carina Berg hosted the TV4 show Stjärnor på is the Swedish version of Stars on Ice. In 2009 Gynning hosted Hjälp! Jag är med i en japansk TV-show also on TV4 and in the summer of that year hosted Sommarkrysset along with Berg. In 2013 she was one of the celebrity hosts of the radio show Sommar i P1. In 2014, Gynning will be one of the judges in the new season of Talang Sverige 2014 on TV3.

A few months before Gynning participated as a housemate in Big Brother, she appeared in the French film Happily Ever After starring Johnny Depp, playing the character "Zoe". In the Jesper Ganslandt-produced film Blondie (2012), Gynning played the leading role alongside actors such as Marie Göranzon, Helena af Sandeberg and Alexandra Dahlström.

On 8 February 2008 Gynning released her first music single, "Allt jag tar på blir till guld". In her first television show, I huvudet på Gynning, the viewing audience got to see her working on the music video for the song. In the show Gynning created the perfume "Perfect", and launched a commercial for it. In the last episode it was revealed that her perfume would sell in stores. In September 2009, Gynning released her new scent "Go Girl!", becoming the first Swedish woman to have her own perfume and scent.

In 2005, Gynning released her autobiography, Ego Girl, in which she tells how she was discovered as a model at age sixteen and lost herself in a world of sex and drugs before finding herself again. In 2007, a mail correspondence between Gynning and Alex Schulman was released as a book.

At the end of 2008 Gynning, together with writer Ingrid Carlqvist, wrote the book Ego Woman, a follow-up to Ego Girl. The book was released by the company Tivoli in 2009.

In 2011, she debuted as a book author herself with the book Laura - flickan från havet, released by Bladh. She got the idea for the book after meeting with author Jens Lapidus. Gynning stated that she wanted to write a book about women who live around Stureplan in Stockholm. She has described the book as a "dirty crime" book. In 2012 the continuation book, Vanessa - flickan i glaskupan, was released.

Gynning has had several exhibitions of her artwork. In April 2009, she hosted a vernissage at Ystad Saltsjöbad. The exhibition was well-received and 15 pieces were sold for between 1 and 2 million (SEK), according to Gynning. Two of the prominent pieces were named Bleeding Barbie and Cat Power. She has also worked with glass and designed a glass collection for the Cervera stores. She had an art exhibition at Gothia Towers on 21 November 2013, along with her mother Agneta Gynning.

She has recently opened an art studio with her mother under the name Studio Gynning, and has been planning a celebration to mark her ten years anniversary as a professional artist. She is also a jewelry designer. She has also revealed in a newspaper interview that motherhood has affected her art. Her paintings, she has said, are not as dark now as previously, and although in the past she drew mainly portraits, she now paints the whole body. She attributes this to her having become a mother and to her sense that she is now a more complete person.

In 2008, Swedish Aftonbladet listed Gynning amongst the most powerful people in Sweden, placing her at number 37. Gynning at the Monaco Grand Prix in 2006 before the implants were removed.

In January 2007, Gynning declared to the media that she would remove and sell her breast implants, as she wished to downsize her breasts. In early February 2007, she underwent surgery to remove the implants and Elisabeth Ohlson Wallin took photos of them. The implants were placed in a plexiglass box and sold on the auction site eBay; revenues from the sale were given to a charity that works with victims of the war in Rwanda.

Gynning comes from a very artistic family. She is the daughter of Agneta Gynning, an artist, and her grandfather's brother was the well-known artist and textile artist Lars Gynning, who studied under Isaac Grünewald.

In 2013, Gynning and her mother opened an art gallery in Malmö.

Gynning is living with Alexander Lydecker, a sales manager. The couple have two daughters, Alicia, born in 2012 and Adele, born in 2014, and live in a suburb of Stockholm near the coast. 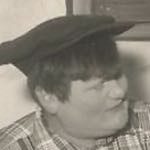