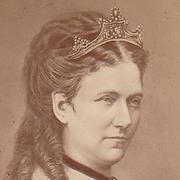 Carola of Vasa Queen of Saxony

Carola of Vasa
The basics

Carola of Vasa (Karoline Frederikke Franziska Stephanie Amalia Cecilia; 5 August 1833 at Schönbrunn – 15 December 1907 at Dresden) was a titular princess of Sweden, and the queen consort of Saxony. She was the last Queen of Saxony.

She was the daughter of the former Crown Prince Gustav of Sweden and Princess Louise Amelie of Baden, and a granddaughter of King Gustav IV Adolf of Sweden who had been deposed in 1809.

In the early 1850s, she was considered one of the most beautiful princesses of Europe. Suitors were not lacking, and there had been plans for her to marry Napoléon III, Emperor of the French. She was a cousin of the Emperor's through her maternal grandmother Stéphanie de Beauharnais, also the adoptive daughter of Napoleon I and a Princess of the First French Empire. Her father was against the marriage due to the volatile political situation in France and his dynasty's historical dispute with the Bonaparte dynasty. 20 years later, when Napoleon III fell from power, her father is quoted as saying, "I foresaw that correctly!"

In 1852, against her father's wishes, Carola converted to Catholicism. On 18 June 1853, Carola married in Dresden, Crown Prince Albert of Saxony. Their marriage was childless, although she suffered many miscarriages. Her closest heirs were: in paternal side, Frederick II, Grand Duke of Baden (1857–1928), son of her first cousin; and her first cousin King Carol I of Romania (1839–1914) in maternal side.

She had a good relationship to her parents-in-law and was described as their support during difficult times. Already as a crown princess, Carola began the activity within social issues which she would continue as a queen. In 1866, she visited Saxony's field hospitals in Vienna, where she made herself known as a good samaritan. In 1867, she founded the Albert commission, which contributed to the medical care of the German army during the war of 1870-71. For her work, she was decorated with the Prussian Luisen-Orden and the Saxon Order of Sidonia. In 1871, she accompanied Albert to Compiègne after the defeat of France, where she entertained the officers of the victorious armies as a popular hostess.

In 1873, her spouse succeeded his father as King Albert I, making Carola queen. In 1884, the deposed Vasa dynasty made peace with the new Swedish Bernadotte dynasty through her, when the remains of her grandfather, king Gustav IV Adolf of Sweden, her father and her brother Ludvig were taken to Stockholm and interred in the royal crypt. In 1888, Carola and her spouse made an official visit to Sweden.

Queen Carola made an important contribution to the health care organisation in Saxony. In 1867, as Crown princess, she and Marie Simon founded the Albert-Verein. She founded a wet nurse school at Leipziger Tor (1869), the hospital "Carola-Haus" (1878), the women employment agency Johannes-Verein (1876), a women's school in Schwarzenberg (1884), the home "Gustavheim" for the old, sick and weak in Niederpoyritz (1887), the school Lehrertöchterheim Carola-Stift Klotzsche (1892) and the home for handicapped Amalie hus Löbtau, Friedrichstadt (1896). Carola was a popular queen. She was widowed in 1902.

She was the 499th Dame of the Royal Order of Queen Maria Luisa.

At the time of her death, she was the last surviving grandchild of Gustaf IV Adolf.

The contents of this page are sourced from Wikipedia article on 08 Mar 2020. The contents are available under the CC BY-SA 4.0 license.
View Carola of Vasa 's image gallery
Image Gallery 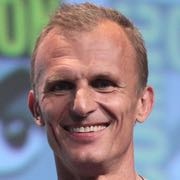