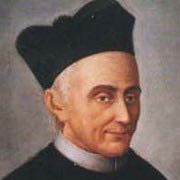 Blessed Charles Steeb (18 December 1773 – 15 December 1856) was a German priest of the Roman Catholic Church and the founder of the Sisters of Mercy of Verona. That order no longer exists. Steeb was originally a Lutheran but converted to Roman Catholicism while studying in Italy.

Pope Paul VI beatified him in 1975 after the recognition of a miracle that was attributed to his intercession. The cause still continues pending recognition of another miracle.

Charles Steeb was born on 18 December 1773 to Lutheran parents. He travelled to France and studied in Paris as a teenager but fled during the French Revolution. He studied in Verona but contact with priests led to his conversion to Roman Catholicism. His parents disowned him when this was discovered.

Steeb was later ordained to the priesthood and ministered to the sick. He studied canon law and civil law in Pavia, and later went on to teach languages. He was the founder of the Sisters of Mercy of Verona.

The cause of sainthood commenced on 6 July 1963 despite the fact that the cause conducted preliminary work from 1949 to 1952. Pope Paul VI recognized his life of heroic virtue and named him to be Venerable on 19 November 1970, and later beatified him on 6 July 1975.

The contents of this page are sourced from Wikipedia article on 09 Mar 2020. The contents are available under the CC BY-SA 4.0 license.
View Carlo Steeb 's image gallery
Image Gallery